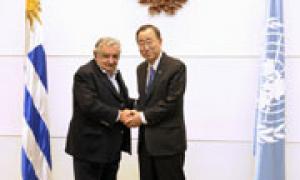 Secretary-General Ban Ki-moon today thanked Uruguay for being one of the largest contributors to United Nations peacekeeping worldwide.

“Uruguay’s commitment to global peacekeeping is without rival,” Mr. Ban said in his remarks to the National School for Peacekeeping Operations, located in the capital, Montevideo. “When adjusted for population, no country contributes more troops than Uruguay.”

Speaking directly to Uruguayan peacekeepers, the Secretary-General said: “Your efforts directly help millions of people by providing security and promoting reconciliation, clearing land-mines and demobilizing combatants, strengthening institutions and the rule of law, delivering aid and repatriating refugees and displaced persons, supporting democratic elections, reforming the security sector and so much more.”

He later told the Uruguayan Parliament that the country provided what he called a “special brand of Uruguayan leadership and global example.”

“Uruguay’s peacekeepers are your brave sons and daughters,” he said, “but they are also the world’s best and brightest.”

“So, in truth, my message today comes down to three words: Muchas gracias, Uruguay.”

More than 25,000 Uruguayans have served in 21 peacekeeping missions since 1951, with some 2,400 Uruguayans currently serving under the blue flag. Twenty-seven Uruguayans died in UN service.

“They have maintained peace and security in some of the world’s most dangerous places. For millions of people, United Nations peacekeepers are their last, best chance,” he said.

The two men discussed the situation in Haiti, where many Uruguayan troops are serving, and climate change, according to Mr. Ban’s spokesperson.

Also on Tuesday, Mr. Ban received the Uruguayan Medal of the Republic on behalf of the UN.

The Secretary-General is on a week-long visit to Latin America, with stops in Colombia, Argentina, Uruguay and Brazil.

Secretary-General Ban Ki-moon today paid tribute to the more than 120,000 military, police and civilian personnel serving in the various United Nations peacekeeping missions across the world and honoured those who have lost their lives in the cause of peace.