Libya: Ban insists on ceasefire and transition talks during discussions with premier

Libya: Ban insists on ceasefire and transition talks during discussions with premier

25 May 2011
Secretary-General Ban Ki-moon has spoken with the Libyan Prime Minister and reiterated the urgent need for a real ceasefire and serious negotiations on initiating a transition to a government that fully meets the aspirations of the people of the North African country.

Mr. Ban told Al Baghdadi Ali al-Mahmoudi in a telephone conversation last night that his Special Envoy, Abdul Elah al-Khatib, has had discussions with the opposition since he visited Tripoli last week, and that he would soon be going again to Tripoli, the Libyan capital, according to information released by the spokesperson of the Secretary-General.

The Secretary-General said that Mr. Al-Mahmoudi had again expressed his deepest concerns over the campaign of air strikes in Libya by a coalition of countries.

Libya has been engulfed by fighting since a pro-democracy movement opposed to the regime of Muammar al-Qadhafi emerged in February following similar protests in Tunisia, Egypt and other countries across North Africa and the Middle East.

Hundreds of people have been killed in the fighting and hundreds of thousands of others have been internally displaced or forced to flee to neighbouring countries.

The Security Council in March adopted a resolution which calls for an immediate ceasefire and authorizes United Nations Member States to take “all necessary measures” to protect civilians in Libya.

Soon after the resolution was adopted, some countries launched a bombing campaign against military assets in Libya that are considered a threat to the safety of civilians.

Addressing the African Union’s Extraordinary Summit on Peace and Security today in the Ethiopian capital, Addis Ababa, Mr. Ban said the next step for Mr. Khatib will be to have the Libyan opposition engage with Mr. Qadhafi’s regime to define the nature of a transitional period.

He recalled that at the London Conference on Libya in March, it was agreed that the UN would coordinate the international community’s post-conflict efforts in Libya. On that regard, he said, his special adviser, Ian Martin, has initiated a pre-assessment process focusing on six issues – political, security apparatus, rule of law and human rights, economic recovery, public administration and physical infrastructure.

“Of course, our planning will be guided by the principle that the fate of Libya is to be decided by the Libyan people, and that their representatives must determine what assistance they would like from the international community,” said Mr. Ban.

He stressed that the main victims of the heavy fighting in densely populated areas of Libya are unarmed civilians and foreign migrant workers trapped by the fighting, and voiced concern over fuel shortages, decreasing food supplies and low stocks of medicines.

Neighbouring countries, meanwhile, faced the dual burden of a drop in remittances and the need to reintegrate thousands of former expatriates, the Secretary-General said.

“Despite some speculation about differences, all of us, without equivocation, condemned the violent events.

“All of us recognize the legitimate aspirations of the Libyan people for freedom, democracy, respect for human rights, dignity and justice. Since the adoption of resolution 1973, we have all sought to end the violence. The AU and others have elaborated roadmaps for resolving the situation. These plans have many more areas of commonality than of disagreement,” he added. 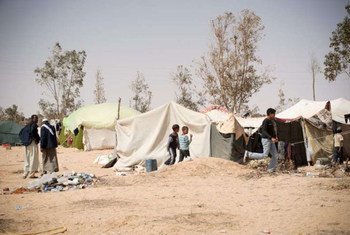 18 May 2011
The United Nations today called for an extra $233 million to help more than 2 million civilians caught up in the conflict in Libya, revising its earlier humanitarian appeal as the scale of the suffering and need continues to increase.