A United Nations human rights expert on Myanmar said today that the continued treatment and condition of ethnic minority groups in the country’s border areas were seriously restricting the Government’s intended transition to democracy.

“Violence continues in many of these areas, while systematic militarization contributes to human rights abuses,” said Tomás Ojea Quintana, UN Special Rapporteur on the situation of human rights in Myanmar, in a statement.

“These abuses include land confiscation, forced labour, internal displacement, extrajudicial killings and sexual violence. They are widespread, they continue today, and they remain essentially unaddressed by the authorities.”

Mr. Ojea Quintana, who was not able to visit Myanmar, spoke after wrapping up an eight-day visit to neighbouring Thailand.

He said he saw “positive signs” in the elections of new national and regional legislatures earlier, but added that “it is too early for them to function effectively and to manage this important and complex issue that has a direct impact on ongoing human rights abuses and compromises stability. ”

He said the electoral process excluded several significant ethnic and opposition groups, “so their voices are not being heard in these fora.”

Last week Vijay Nambiar, the Secretary-General’s Special Adviser for Myanmar, told the Security Council that the prisoner release was short of expectation and insufficient.

Mr. Ojea Quintana said: “Through this mission, I see some positive signs in the developments. In the first and only sitting of the Parliament so far, MPs, despite limitations, were able to raise some important questions from the human rights perspective.”

The Special Rapporteur also noted the beginning of discussions about economic, social and cultural rights and some participation by ethnic minority parties in the legislatures.

“The new President’s speeches have led to some expectations for positive change. He provides some interesting ideas that could be developed into benchmarks for progress. We will have to watch closely to see how this is translated into action.”

President Thein Sein was elected by Parliament in February.

“It is my hope to be able to visit Myanmar as soon as possible to continue discussions with the authorities and other stakeholders about progress being made towards the transition to democracy and concerns about the ongoing serious human rights situation in the country.”

Mr. Ojea Quintana, who has served in an unpaid and independent capacity since May 2008, reports to the UN Human Rights Council in Geneva 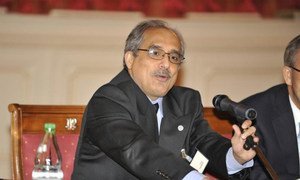 The top United Nations envoy for Myanmar has told the Security Council that while the country has taken small steps in the right direction by releasing some political prisoners and reducing the sentences of others, the measures have been short of expectation and insufficient.