Secretary-General Ban Ki-moon has reiterated his calls for an immediate end to the violence in Syria and for an independent inquiry into the numerous killings during recent protests amid fresh reports of deadly clashes in the Middle East country.

“He noted the need to respect the human rights of the population,” Mr. Haq said.

The Secretary-General has previously called for an independent investigation of all the killings that have occurred during the protests, including the alleged killing of military and security forces.

The protests in Syria – which have reportedly claimed hundreds of lives – are part of a wider uprising this year across the Middle East and North Africa that has toppled long-standing regimes in Egypt and Tunisia and led to open conflict in Libya.

Last month the UN Human Rights Council voted for a mission to be sent to Syria to probe allegations of violations of international human rights law and crimes committed against civilians.

Mr. Ban has also stressed the humanitarian needs of the population, and called for a UN team to enter Syria to assess the humanitarian situation, particularly in the southern city of Deraa.

Valerie Amos, Under-Secretary-General for Humanitarian Affairs and UN Emergency Relief Coordinator, told reporters that her office was expecting to send a team to Syria yesterday, but the Government had postponed the visit.

Ms. Amos said her office had been assured that a visit could take place later this week and she was seeking more information from Syrian authorities. 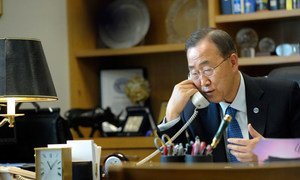 Syria: Ban calls for probe into killings and end to violent repression of protests

Secretary-General Ban Ki-moon today called for an independent investigation of all killings that occurred during the demonstrations that have rocked Syria in recent weeks and reiterated his call for an end to the violence and mass arrest of people taking part in peaceful protests.