The United Nations humanitarian arm is voicing concern about the situation in Colombia, where a new rainy season is wreaking havoc at a time when many areas have not yet recovered from last season’s devastating floods.

Colombia’s meteorological authorities have maintained red alerts for the main rivers and river basins in the country’s Andean region, the UN Office for the Coordination of Humanitarian Affairs (OCHA) reported.

More than 2 million Colombians were affected by last year’s floods, and in some places flood waters are yet to recede, according to OCHA.

The governors of some affected departments are reporting that this year’s flooding is worse than last year’s inundations, and the cumulative toll has risen to 410 people dead and 482 others missing.

“The emergency in some areas of the country is not yet over, and we are really concerned about the impact of the new rainy season on already affected communities,” said Stephanie Bunker, a spokesperson for OCHA.

A food security assessment conducted by the UN World Food Programme (WFP) earlier this year found that the food security and nutrition situation in flood-affected areas have deteriorated sharply, with many households along the Caribbean and Pacific coasts – among the hardest-hit areas – reducing their number of daily meals to two or even one.

A third of households in the assessment had no income source, and the situation is exacerbated by the rising costs of many basic foods.

Ms. Bunker said Colombian authorities had made significant efforts to respond to the floods, including holding a fundraising campaign that harnessed the support of the private sector, civil society and the international community.

“We believe that it is very important to continue supporting the Government’s efforts as there are still unmet humanitarian needs, especially in the sectors of water, sanitation and hygiene, food security, nutrition and health, protection, housing and education.”

OCHA reported that the humanitarian situation has been further complicated by the flooding extending to areas also affected by the long-standing armed conflict within Colombia. Illegal armed groups, including new groups that have formed after paramilitary groups were demobilized, operate in these areas. 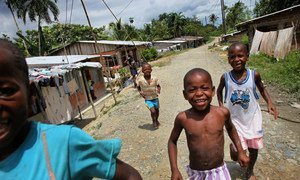 The United Nations refugee agency has voiced concern over the plight of hundreds of people in western Colombia who have been forced to flee their homes amid an increasingly violent struggle between illegal armed groups over the control of mining and coca farming in the area.