The residents of eight villages in Darfur will be among the first in the arid Sudanese region to have easier access to water under an initiative backed by the joint United Nations-African Union peacekeeping force (UNAMID).

The mission will distribute several thousand high-capacity water containers – each shaped like a barrel, and capable of carrying 75 litres or four standard jerry cans of water – to the villagers over the next two weeks.

In Kuma Garadayat in North Darfur state, Ibrahim Gambari, the Joint Special Representative and head of UNAMID, helped hand out the containers to women who have returned to the village.

Women and children are usually responsible for collecting water for their families in Darfur, a vast and remote region where rainfall is relatively low and droughts common.

“The project is to make life easier and safer for women, and also to underscore the fact that water hasn’t only been a source of conflict; it is also the solution,” Mr. Gambari said. “It is our hope that their use will not only support former displaced persons but also help protect civilians as they return to resume their lives.”

The containers are designed to relieve most of the physical burden of carrying water and to reduce the number of trips a resident will have to make to a water source.

“One of the major sources of conflict in Darfur is water,” Mr. Gambari stressed to the residents of Kuma Garadayat, which lies about 60 kilometres from El Fasher, the capital of North Darfur and the site of the headquarters of UNAMID.

“Among our main priorities is to assist communities who want to return to their homes [to] continue with their lives. And so I want to show you our commitment to seeking durable peace and access to water.”

Aside from residents of the eight villages, the water containers have also been provided to members of a women’s cooperative in West Darfur state. Eventually the containers will be distributed to villagers across the region.

Darfur is home to large numbers of internally displaced persons (IDPs) since conflict erupted between rebels, Government forces and allied militiamen in 2003. 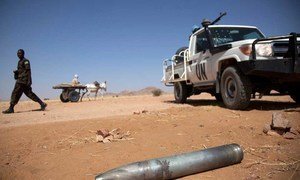 The peace process to resolve the conflict in the Darfur region of western Sudan region has entered a crucial phase with parties to the dispute considering texts of key elements that would form the basis of a draft comprehensive agreement, a senior United Nations official told the Security Council today.