Yemen: UNICEF sounds warning over impact of unrest on children

The United Nations Children’s Fund (UNICEF) today urged the parties to the political unrest gripping Yemen to protect children at all costs as the number of minors killed or injured during the recent violence continues to rise.

At least 26 children have been killed, mainly because of live bullets or ammunition, since 18 February, UNICEF spokesperson Marixie Mercado told journalists in Geneva.

Another 15 children died as a result of the large explosion at the Abyan ammunition factory last month, when civilians reportedly looted the facility, which had been previously taken over by militants.

Ms. Mercado said more than 80 other children had been injured, either from being beaten with sticks, hit by rocks or shot at with live ammunition, while nearly 800 more had been exposed to tear gas.

The spokesperson noted that the unrest, part of a wider wave of pro-democracy protests across North Africa and the Middle East, was taking a particularly heavy toll on Yemeni children.

UNICEF is attempting to support critical services for children in Yemen, which is already the poorest country in the region.

Senior UN officials, including Secretary-General Ban Ki-moon, have repeatedly expressed concern in recent weeks over the situation in Yemen, and especially over the use of force by government security forces against peaceful demonstrators. 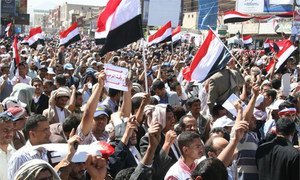 Yemen: UN human rights office calls for halt to use of force against protesters

The United Nations human rights office today called on the Yemeni Government to immediately halt the use of force against people exercising their right to peaceful protest, noting that over 100 people have reportedly been killed since the demonstrations began.