Secretary-General Ban Ki-moon has called on Iraqi leaders to complete the formation of their new Government as soon as possible so that it can press ahead with crucial tasks, including bolstering stability and addressing social and economic challenges.

“The transition from one elected government to another was an historic accomplishment and brought an end to months of political uncertainty,” Mr. Ban writes in his latest report on the UN Assistance Mission for Iraq (UNAMI).

However, he adds, further steps need to be taken to complete the Government formation process as soon as possible, including appointments to key security posts.

“The early finalization of the Government formation process will enable Iraq’s leadership to take the measures required to address the legitimate concerns of the Iraqi people,” he says. “As unfolding events have shown over the past few weeks, Iraq is not immune to the wave of civil unrest that has affected other parts of the region.”

He notes that the demonstrations that took place across Iraq since late February and the violence that ensued – with an estimated 20 people killed and 116 injured – underscore the urgent need to tackle the poor state of public services, high unemployment and the perceived failure to tackle corruption.

“Unless there is quick and concerted action by the Government of Iraq to address these concerns, the political and security gains that Iraq has made in recent years could be undermined,” he warns.

Mr. Ban also expresses his concern at the use of force by Iraq’s security forces in handling some of these protests and the consequent loss of life, as well as at reports of arbitrary arrests, detention and torture, and the ill-treatment of journalists and media personnel covering the events.

“I call on the Government of Iraq to conduct an independent investigation into these alleged violations and to ensure a measured approach in dealing with future protests by exercising maximum restraint and avoiding violence,” he states.

The Secretary-General also pledges continued UN support as the Government addresses the major socio-economic challenges, noting that with the establishment of the new Government, UNAMI and the UN country team have stepped up their engagement with national counterparts.

The UN family continues its vital assistance in such areas as anti-corruption, achievement of the anti-poverty targets known as the Millennium Development Goals (MDGs) by their target date of 2015 and the management of water resources, a critical issue for the country.

Mr. Ban also highlights the urgent need for Iraqi leaders to work together to resolve the status of Kirkuk and other disputed territories, noting that UNAMI is assisting all stakeholders to find mutually acceptable solutions.

Meanwhile, he says that despite the progress on the political front, the overall security situation remains “tenuous,” pointing in particular to continued attacks against various religious minorities in the country.

The UN continues to operate in a volatile environment; there were 3,000 security incidents over the past four months, resulting in at least 950 civilian deaths. Mr. Ban notes that UNAMI is working to ensure that “robust, credible and flexible” security arrangements are in place before the drawdown of United States forces at the end of 2011.

“Given that insurgents still demonstrate capacity to stage complex attacks in Iraq, a trend that is likely to continue in the near future, the United Nations will need to continue to remain vigilant in ensuring the safety and security of its personnel,” says the Secretary-General. 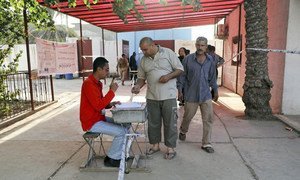