Guinea-Bissau still has a long way to go in fighting impunity, drug trafficking, organized crime, and other “remaining triggers of instability” in a country that has for years been dogged by war, coups, coup attempts and assassinations, a senior United Nations official warned today.

“Much progress is yet to be made,” Secretary-General Ban Ki-moon’s Special Representative Joseph Mutaboba told the Security Council, while acknowledging some positive steps towards  civilian control and reform of the security sector, with a roadmap plan already drawn up in cooperation with the Economic Community of West African States (ECOWAS) and the Community of Portuguese-speaking Countries (CPLP).

The plan is now awaiting final endorsement by ECOWAS heads of State and government, and he stressed the urgency for the reforms to be put into effect in a country which has long seen military intervention in politics and has more recently raised international concerns as a transit point on major drug trafficking routes from South America to Europe.

In a press statement issued after the meeting, the Council voiced continued concern at the insecurity and growth in trans-national organized crime, including illicit drug trafficking, which it called a threat to regional peace and security. It called on the authorities to intensify efforts “in creating the enabling environment for enhanced civilian control and reform of the security sector, fighting against impunity, and tackling illicit drug trafficking.”

Mr. Mutaboba was presenting Mr. Ban’s latest report on the UN Integrated Peacebuilding Office in Guinea-Bissau (UNIOGBIS), set up last year as a successor to the UN Peacebuilding Support Office in Guinea-Bissau (UNOGBIS), which had been in the country since 1999 as part of international efforts to help it recover from civil war in which thousands were killed, wounded or forced from their homes.

In the ensuing years, the country has still been plagued by instability, most recently with the assassination of President João Bernardo Vieira in 2009 and the brief detention on 1 April last year of Prime Minister Carlos Gomes Junior, the Chief of General Staff and other senior military officers by other members of the armed forces.

Stressing the “positive momentum” generated by the partnership with ECOWAS and the CPLP and its “critical impact” on the political and security environment, Mr. Mutaboba noted that long-standing tensions between Mr. Gomes and President Malam Bacai Sanhá had eased in recent months, with the two men maintaining a close dialogue on major domestic issues.

On the fight against impunity, he noted the release in December of a former army chief of staff and other officers detained without due process since the 1 April incident but said that not much progress had been made on other fronts such as investigating Mr. Vieira’s assassination.

Turning to drug smuggling, he cited recent actions such as the closure of an air strip used for illegal flights and the burning of seized drugs, but he stressed the need for the Government to “continue to demonstrate its resolve to fight this scourge” by mobilizing adequate human and financial resources and allowing foreign vessels to patrol Guinea-Bissau’s territorial waters and conduct joint policing activities.

Prime Minister Gomes told the Council that his country needs additional financial, material and technical support from the international community, highlighting the dangerous link between drug trafficking and terrorism. “Guinea-Bissau is not a narco-State and by itself it does not have the conditions necessary to successfully face drug trafficking and terrorism,” he said.

“Recent developments in the economic plain are very promising and the gains that we have made can be amplified if the engagement and continued support of the international community is assured,” he added, citing the recent $1.2-billion debt agreement, stressing that the country still remained mired in poverty and pledging intensified structural reform. “The Government continues to insist on the need for greater involvement of the international community.”

Brazilian Ambassador Maria Luiza Ribeiro Viotti, head of the UN Peacebuilding Commission’s panel on Guinea-Bissau, called for increase international support. “The window of opportunity has re-opened for Guinea-Bissau,” she said, while urging further concrete steps in fighting impunity and promoting civilian control of the military. “We need to support capacity building and assist the country revitalize its economy…

“We must take advantage of this positive momentum. More than ever engagement and cooperation with Guinea-Bissau is necessary to assist the country in building democratic governance and effectively addressing key challenges. The international community should step up its support.”

Guinea-Bissau is one of six countries currently on the agenda of the Commission – along with Burundi, Guinea, Sierra Leone, the Central African Republic (CAR) and Liberia – set up in 2005 to help countries emerging from conflict make an irreversible transition from war to sustainable peace.

In his report, Mr. Ban stressed the need for political stability but sounded a positive note on the economy, noting that despite continuing structural fragility, Guinea-Bissau has continued to pursue important reforms enabling it to make significant progress in managing its debt burden, thus opening up opportunities to stabilize the economy and promote economic growth. 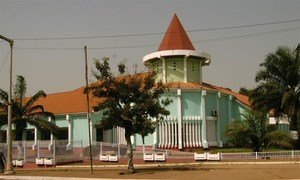 Guinea-Bissau is countering the effects of last year’s unrest, and the United Nations is helping to promote security sector reform in a country that has been dogged by war, coups and assassinations in recent years, Secretary-General Ban Ki-moon says in his latest report.