Thanks to improved economic conditions worldwide, international tourism recovered strongly last year following the decline brought on by the global financial crisis and recession of late 2008 and 2009, the United Nations agency tasked with monitoring the sector said today.

While there was an increase in tourist arrivals in all regions, emerging economies remain the main drivers of this recovery, according to the UN World Tourism Organization (UNWTO), which is based in Madrid, Spain.

“The recovery in international tourism is good news, especially for those developing countries that rely on the sector for much-needed revenue and jobs,” said UNWTO Secretary-General Taleb Rifai.

“The challenge now will be to consolidate this growth over the coming years amid a still uncertain global economic environment,” he added in a news release.

The agency said that Asia was the first region to recover and the strongest growing region in 2010, with international tourist arrivals reaching a new record of 204 million last year, up from 181 million in 2009.

Africa, which was the only region to show positive figures in 2009, maintained growth during 2010, thanks in part to the hosting of events such as the FIFA World Cup in South Africa. Results returned to double digits in the Middle East, where almost all destinations grew by 10 per cent or more.

Recovery was slower in Europe than in other regions due to the air traffic disruption caused by the volcanic eruption in Iceland and the economic uncertainty affecting the Euro zone, noted the agency. While some individual countries performed well above the regional average, this was not sufficient to bring overall results above the losses of 2009.

Meanwhile, UNWTO said that the Americas rebounded from the decline in 2009 brought on by the economic hardship suffered in North America and the impact of the influenza A (H1N1) outbreak.

The return to growth in the United States economy has helped improve the region’s results as a whole, as did the increasing regional integration in Central and South America and the vitality of Latin American economies. Growth in tourism was strongest in South America.

Following last year’s recovery, growth in tourism is expected to continue in 2011 but at a slower pace, said the agency. 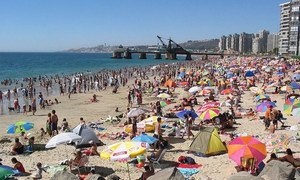 While the international tourism industry was negatively affected by the global economic crisis, the sector is expected to grow in the coming years and provide millions of new jobs, according to the United Nations labour agency.