An international team of archaeologists has begun a three-year survey, coordinated by the UN Educational, Scientific and Cultural Organization (UNESCO), of the archaeological ruins of Lumbini, the birthplace of Buddha in Nepal.

Lumbini is a world-renowned Buddhist pilgrimage destination and a UNESCO World Heritage site since 1997.

The project, funded by the Japanese Government and coordinated by the UNESCO office in the Nepalese capital, Kathmandu, aims to identify the presence, or absence, of archaeological deposits, invisible below the surface, so that appropriate placing of pilgrim facilities can be made without damaging valuable archaeological resources.

“UNESCO welcomes the implementation of this innovative and interdisciplinary project which mobilises national and international experts towards the strengthening and conservation of the World Heritage Property of Lumbini for the benefit of humanity,” said Axel Plathe, Head of UNESCO’s Kathmandu Office.

The team of archaeologists, including experts from Nepal’s Department of Archaeology and the Lumbini Development Trust, is directed by Robin Coningham, UNESCO Archaeological Expert and Professor of Archaeology, University of Durham.

“This project offers a unique opportunity to investigate some of the earliest developmental phases of one of the world’s great religious traditions, and will introduce new scientific evidence into the debate surrounding the date of the Buddha’s birth,” said Mr. Coningham.

Siddhartha Gautama, who later became Buddha, was born in 623 B.C. in the famous gardens of Lumbini. The Indian emperor Ashoka, a pilgrim to the site, erected a commemorative pillar there.

The three-year initiative is part of a larger project entitled “Strengthening the Conservation and Management of Lumbini, the Birthplace of Lord Buddha,” launched last year to address a number of issues and challenges facing the World Heritage site, including the deteriorating condition of the Marker Stone and the Ashokan pillar, as well as inadequately mapped associated archaeological remains both within the site and in the adjacent areas. 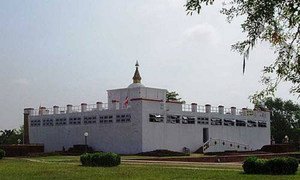 The United Nations Educational, Scientific and Cultural Organization (UNESCO) and Japan have partnered to conserve and manage the birthplace of Buddha in southern Nepal.