Eradicating global poverty while promoting sustainable development is the key challenge facing the world, as it becomes clear that economic progress based on the current pattern of production and consumption is increasingly harmful to the environment, according to a new United Nations report released today.

The report entitled “Objective and Themes of the United Nations Conference on Sustainable Development” points out that despite two decades of progress since countries first laid out a blueprint for sustainable development at the 1992 Earth Summit in Rio de Janeiro, the use of the planet’s natural resources continue to damage crucial ecosystems.

Extreme poverty persists in many parts of the world, despite the fact that world’s Gross Domestic Product (GDP) has increased by roughly 60 per cent since 1992, according to the report issued by the Secretary-General to coincide with discussions in New York, today and tomorrow, to prepare for next year’s UN Conference on Sustainable Development in Rio de Janeiro.

The informal discussions are focusing on the objectives and themes of the conference called for by the General Assembly to look into scaling up effort to achieve sustainable development and to explore how countries can green their economies.

“Today we will review what we have accomplished so far in preparing for Rio+20, what lessons have been learned and how best to move ahead,” said Sha Zukang, the UN Under-Secretary-General for Economic and Social Affairs.

“My hope is that the intersessional meeting can help participants reach common ground and focus on those critical elements of an action-oriented, forward-looking outcome of the Conference, which will help launch our world on a trajectory towards global sustainability in the 21st century,” said Mr. Zukang.

The report notes that although many countries are incorporating the green economy concept in policy guidelines, most do not have an overall strategy for a green economy for sustainable development and poverty eradication.

It states that the concept of a “green economy” should be flexible, allowing governments to define their own paths toward sustainable development, based on national circumstances and priorities.

The challenge, however, is that while developed countries can focus more on addressing environmental problems, developing countries must continue to raise their people’s living standards while trying to contain adverse environmental impacts, according to the report.

Next year’s conference will also tackle questions related to the institutional framework for sustainable development. Intergovernmental consultations in the run-up to the conference started last year.

In his remarks at today’s session Olav Kjorven, the UN Development Programme’s (UNDP) Director of Policy and Assistant Secretary-General, said the fund continues to support countries seeking to strengthen national green economy efforts, while aligning them with poverty eradication.

“The green economy is broader than simply low-carbon growth because the social dimension and poverty eradication remain paramount for most developing countries – and for UNDP,” said Mr. Kjorven.

♦ Receive daily updates directly in your inbox - Subscribe here to a topic.
♦ Download the UN News app for your iOS or Android devices.
sustainable|development 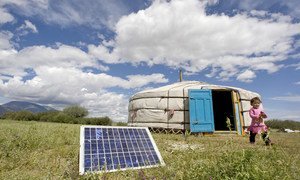 Intensifying investments in clean energy can accelerate the achievement of the Millennium Development Goals (MDGs), the eight globally-agreed targets to slash poverty by 2015, the United Nations Environment Programme (UNEP) says in a new publication.