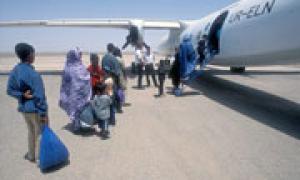 The United Nations refugee agency announced today that its programme to facilitate family visits for Western Sahara refugees who have been separated for more than 30 years has resumed.

The United Nations refugee agency announced today that its programme to facilitate family visits for Western Sahara refugees who have been separated for more than 30 years has resumed.

The Confidence Building Measures programme, launched in 2004 by the UN High Commissioner for Refugees (UNHCR), is a strictly humanitarian and non-political effort to in support of the refugees living in camps near Tindouf, Algeria, and their families in the territory of Western Sahara.

Sahrawi refugees started arriving in Algeria in 1976 after Spain withdrew from the Western Sahara and fighting broke out over its control. Many of the Sahrawi refugees in Algeria have been living in the Tindouf camps for over three decades, according to UNHCR.

The programme is conducted in cooperation with Morocco, the Frente Polisario, as well as Algeria as the host country.

The family-visit flights had been on hold since September after an incident in which passengers on the flight from Smara City in Western Sahara were prevented from disembarking by Frente Polisario representatives on arrival in Tindouf.

UNHCR spokesperson Melissa Fleming told a news conference in Geneva that the first flight will carry 30 people from Laayoune, Western Sahara, to the Smara refugee camp, near Tindouf, while 33 people will travel from the Smara camp to Laayoune later today.

“They will spend five days with their families before being transported back again,” she said, voicing UNHCR’s gratitude to the Government of Morocco and the Frente Polisario for supporting the resumption of what she called an “important humanitarian programme.”

Since the programme was launched, a total of 12,635 Sahrawis have benefited from the family visits, according to the agency. Another 31,058 have registered and continue to wait for the opportunity to be reunited with their families.

UNHCR is planning to host a meeting in Geneva next month with all the parties to discuss the implementation of other components of the Confidence Building Measures programme which, when implemented, will benefit a larger number of Sahrawi families.

The United Nations refugee agency said it is seeking to clarify why a family-visit flight for Western Sahara refugees had to be aborted last week, adding that it hoped the confidence-building measure will be able to resume as soon as possible.