Declaring the situation in Côte d’Ivoire a continuing threat to international peace, the Security Council today extended until the end of next April the weapons, financial and travel sanctions on a country split between a Government-controlled south and rebel-held north by civil war in 2002.

In a unanimously adopted resolution, the 15-member body, which last October renewed sanctions for a full year, said it would review the measures no later than three months after much-delayed presidential elections, now scheduled for 31 October.

A second round is slated to be held on 28 November if there is no clear winner in the final stages of United Nations-backed efforts to reunite the West African country, the world’s largest cocoa producer. Parliamentary polls are also being held.

The sanctions include an arms embargo, restrictions for certain individuals on travel and financial movements, and a ban on any State importing rough diamonds, the so-called “blood diamonds” that have fuelled conflict in the region, including in neighbouring Liberia and Sierra Leone.

The arms embargo does not apply to non-lethal equipment intended solely to enable Ivorian security forces to use only appropriate and proportionate force while maintaining public order.

Today marks the start of the electoral campaign for the polls, originally scheduled for 2005 but continually pushed back, and Secretary-General Ban Ki-moon called on the parties to conduct it peacefully. “The holding of open, free, fair and transparent elections in Côte d’Ivoire will represent a major milestone towards the peaceful resolution of the crisis,” he said in a statement issued by his spokesman.

The UN peacekeeping force in Côte d’Ivoire, known as UNOCI, has already flown in hundreds of additional soldiers to reinforce its 8,650 troops already there. The mission was set up in 2004 to monitor a ceasefire and to help bring stability, including holding elections, to end the split.

Today’s Council resolution noted with concern that despite sustained improvement in the overall human rights situation, reported abuses, including sexual violence, against civilians persist in different parts of the country, and it stressed that the perpetrators must be brought to justice.

It declared its determination to impose targeted measures against persons designated by the sanctions committee to be threats to peace and national reconciliation, obstacles to UNOCI action and freedom of movement, or responsible for serious violations of human rights and inciting publicly hatred and violence.

It noted with concern reports that media outlets were inciting violence and a resumption of internal conflict, and it stressed its readiness to impose sanctions against those who obstruct the electoral process, specifically the action of the Independent Electoral Commission and all other operators involved. 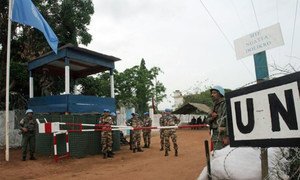 On eve of electoral campaign in Côte d’Ivoire, UN envoy appeals for calm

On the eve of the start of the electoral campaign in Côte d’Ivoire, the top United Nations official there today called on all sides to avoid any violent disruption of the long-delayed process to end the division of the West African country caused by civil war in 2002.