WHO/Marko Kokic
A mental health counsellor talks with clients in the Democratic Republic of the Congo.
10 October 2010

Days after the United Nations issued new guidelines to facilitate treatment of depression, alcohol abuse, epilepsy and other common mental disorders, Secretary-General Ban Ki-moon today called on world governments to step up to the plate and deliver the necessary services.

“Many countries fall far short in treatment for those suffering with mental illness – even though it is relatively inexpensive and easy to deliver,” he said in a message to mark World Mental Health Day, observed annually on 10 October.

“The vast majority of people with mental, neurological and substance use disorders do not receive even the most basic care. Yet such services are essential if we are to offer hope to some of the most marginalized people in the world, especially in developing countries, to live their lives in dignity.”

The evidence-based guidelines in the Intervention Guide the agency issued on 7 October are presented as flow charts to simplify the process of providing care in the primary health-care setting by non-mental health specialists, including doctors, nurses and other health providers. Placing the ability to diagnose and treat them into the primary health care system will significantly increase the number of people who can access care.

An estimated one in four people globally will experience a mental health condition in their lifetime. People with mental, neurological and substance use disorders are often stigmatized and subject to neglect and abuse.

Mr. Ban called on all countries to fulfil the WHO's mental health Gap Action Programme seeking to scale up services for mental, neurological and substance use disorders for countries, especially with low and lower middle incomes. “With proper care, tens of millions of people could be treated for depression, schizophrenia, epilepsy and other illnesses,” he said.

“We must break down the barriers that continue to exclude those with mental or psychosocial disabilities. There is no place in our world for discrimination against those with mental illness. There can be no health without mental health.”

WHO stresses that the resources currently available for treatment are insufficient, inequitably distributed and inefficiently used. In the majority of countries, less than 2 per cent of health funds are spent on mental health. As a result, a large majority of people with these disorders receive no care at all, it notes.

The issue is a serious one in Afghanistan, where more than 50 per cent of the population, most of whom are women, suffer from psychosocial problems or mental disorders.

“Yet only a fraction of the health budget is spent on mental health,” the WHO office in the country points out. “As a result of this lack of investment, which has also led to a chronic shortage of trained mental health specialists, such as psychiatrists, psychologists, psychiatric nurses, psychiatric social workers and counselors mainly in rural areas, a large majority of people with these disorders receive no care at all.”

WHO has pledged its readiness to provide technical assistance to national health authorities to implement and further develop basic mental health services. 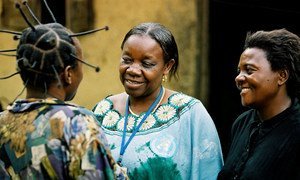