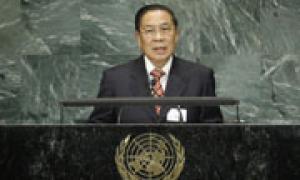 Laos, one of the countries most affected by cluster munitions, today invited Member States to a meeting later this year on the implementation of the United Nations-backed pact banning the deadly weapons, saying the gathering will be an opportunity to reaffirm opposition to their use.

Laotian President Choummaly Sayasone told the high-level debate of the General Assembly that the first meeting of State Parties to the Oslo Convention on Cluster Munitions, which entered into force on 1 August, will be held in the country’s capital, Vientiane, from 9 to 12 November.

“The Oslo Convention… is a result of close cooperation and shared commitment in the international community to put an end to the serious impact and to free people from the danger of cluster bombs,” Mr. Sayasone said.

“As the country most affected by the unexploded ordnance (UXO), especially the cluster munitions, it is a great pride for the Lao PDR to play an active part in the Oslo process,” he said.

He said the meeting will be an opportunity to chart a clear vision and adopt appropriate mechanism to ensure effective implementation of the convention, which calls for the prohibition on the use and the eradication of cluster munitions.

The failure rate makes these weapons particularly dangerous for civilians, who continue to be maimed or killed for years after conflicts end. Some 98 per cent of victims are civilians and cluster bombs have claimed over 10,000 civilian lives, 40 per cent of whom are children.

The effects are especially acute in Laos, where an estimated 37 per cent the country’s territory remains contaminated three decades after end of war in the South-East Asian nation, and an average of 300 Laotians are killed each year as a result of cluster munitions – half the annual global total.

United Nations officials have expressed their delight at Sunday’s entry into force of the international convention banning the manufacture, use and stockpiling of cluster munitions, calling it a “major advance for the global disarmament and humanitarian agendas.”