A mini-summit on Somalia at United Nations Headquarters today called on the Transitional Federal Government (TFG) to end its differences and deliver basic services, and the international community to do much more to support efforts to bring peace to the faction-torn country.

Somali President Sheikh Sharif Ahmed and African Union Commission Chairman Jean Ping attended the gathering on the impoverished Horn of Africa country, which has not had a functioning central government since 1991 and has been torn apart by decades of conflict and factional strife, more recently with al-Shabaab Islamic militants.

A communiqué issued at the end the meeting in New York stressed the lack of sustainable funding for the TFG security forces and the African Union Mission in Somalia (AMISOM).

“Participants called for increased financial support to AMISOM and stressed the importance of predictable, reliable and timely provision of resources to AMISOM,” it said. “They also called for more support for the development of the Somali security forces.”

The summit welcomed UN efforts to improve its internal coordination and effectiveness in Somalia, as well as its intention to enhance its political presence in Mogadishu and establish a light footprint, security permitting, as well as in the Puntland and Somaliland regions.

It voiced great concern about the humanitarian situation and condemned all attacks on aid workers including al-Shabaab’s expulsion of aid organizations from Somalia, the deadly terrorist acts in Uganda in July, and repeated attacks by extremist groups against civilians.

It stressed that gains in the political and security areas needed to be supported by reconstruction activities to ensure long-term stability.

Addressing the meeting, Secretary-General Ban Ki-moon cited progress made and noted that the broad-based TFG is in place, the constitution-drafting process is proceeding, and AMISOM is nearing its planned strength of 8,000 troops and holding its ground, with the UN providing substantial logistical support.

“Many elements are falling into place for transforming Somalia’s prospects,” he said. “But action is urgently needed to make sure that we do not waste this crucial opportunity. Above all, the violence must stop. The leaders of the Transitional Federal Institutions (TFIs) must overcome their internal differences, strengthen the security forces and complete the transitional tasks.

“The Transitional Federal Government should also focus on delivering basic services to the Somali people, pay salaries to the security forces and continue efforts to build up the security sector.”

He underscored the vital importance of reconstruction, where the Somali business community, inside the country and in the diaspora, has a role to play. “The international community must also do more,” he stressed. “I appreciate the generous contributions made by donors, but serious funding gaps remain, both to the Government and to AMISOM.”

On piracy, he noted that the international community has established a Contact Group and deployed ships to try to protect navigation off the Somali coast. “But we should do more to implement existing laws and tackle the problems on land, where piracy originates,” he said. 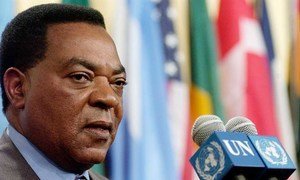 Somali leaders must learn to work together, UN envoy says after premier resigns

Noting the decision by Somali’s Prime Minister to step down, a top United Nations official today urged that the country’s leaders learn to work together to advance peace and stability in the strife-torn nation that has not had a functioning government in over two decades.