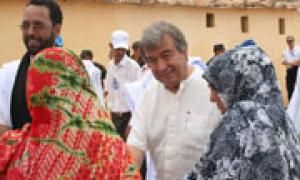 The United Nations refugee agency said it is seeking to clarify why a family-visit flight for Western Sahara refugees had to be aborted last week, adding that it hoped the confidence-building measure will be able to resume as soon as possible.

The flights, aimed at connecting Sahrawi refugees living in camps in Algeria’s Tindouf region with their relatives in the territory of Western Sahara, had been on hold since March and resumed last Friday following discussions between the UN High Commissioner for Refugees (UNHCR) and the parties – Morocco, Frente Polisario and Algeria.

In a news release issued on Saturday, UNHCR voiced “disappointment” that the 20 passengers on the flight from Smara City in Western Sahara were prevented from disembarking by Frente Polisario representatives on arrival in Tindouf.

The agency said it had no choice but to fly the passengers back to Smara.

“UNHCR is seeking to clarify with Frente Polisario the reasons for the refusal of disembarkation,” the agency stated.

It added that it hoped that the Confidence-Building Measures Programme launched in 2004 – of which the flights are one element – will be able to resume as soon as possible.

As of last July, more than 8,750 people had benefited out of some 41,000 applicants for family visits, which were established in 2004 for Sahrawis who have become separated from relatives for years or even decades because of the Western Sahara conflict.

During a visit to North Africa last week by UN High Commissioner for Refugees António Guterres, the leaders of Algeria, Morocco and the Sahrawis agreed to expand the Confidence-Building Measures Programme.

The parties agreed to take up a UNHCR proposal to allow people to travel overland, rather than by air only, for family visits, thereby allowing more people to visit their families.

UNHCR argued that the main benefit would be humanitarian, bringing families together after long periods of separation.

Sahrawi refugees started arriving in Algeria in 1976 after Spain withdrew from the Western Sahara and fighting broke out over its control. Many of the Sahrawi refugees in Algeria have been living in the Tindouf camps for more than 30 years, according to UNHCR.

Mr. Ban discussed the ongoing negotiations today in separate meetings in New York with King Mohammed VI of Morocco and the Minister of Foreign Affairs of Algeria, Mourad Medelci.

He voiced his hope to the King that the upcoming informal meeting between Morocco and the Polisario will contribute to ending the current impasse in the Western Sahara negotiation process.

Mr. Ban underlined that the status quo in Western Sahara is untenable, according to his spokesperson, and expressed his support for the implementation of confidence-building measures that would help build trust among the parties, such as the UNHCR-sponsored family visits.

He raised his concern over the impasse in the negotiations with Mr. Medelci as well, and encouraged Algeria to continue its support to the parties on confidence-building measures.

The two men also discussed Algeria’s progress on the global anti-poverty targets known as the Millennium Development Goals (MDGs), which is the focus of a three-day high-level summit that began today at UN Headquarters, as well as the North African nation’s efforts in the fight against terrorism.

Secretary-General Ban Ki-moon expressed concern today about alleged violations of human rights in the Western Sahara conflict and vowed to continue to promote the rights of Sahrawis after meeting with the head of the Frente Polisario, one of the parties to the dispute.