Top United Nations officials today appealed to all countries that criminalize people on the basis of their sexual orientation or gender identity to reform such laws and to ensure the protection of basic human rights for all.

“No doubt deeply-rooted cultural sensitivities can be aroused when we talk about sexual orientation. Social attitudes run deep and take time to change. But cultural considerations should not stand in the way of basic human rights,” said Secretary-General Ban Ki-moon.

In a message to a panel discussion in Geneva on ending violence and criminal sanctions based on sexual orientation and gender identity, which was delivered by UN High Commissioner Navi Pillay, Mr. Ban noted that the responsibilities of the UN and the obligations of States are clear.

“No one, regardless of their sexual orientation or gender identity, should be subjected to torture or to cruel, inhuman or degrading treatment. No one should be prosecuted for their ideas or beliefs. No one should be punished for exercising their right to freedom of expression.”

In May, during a visit to Malawi, the Secretary-General called for laws criminalizing people on the grounds of sexual orientation and gender identity to be reformed worldwide. Such laws, he noted, fuel violence, help to legitimize homophobia and contribute to a climate of hate.

While in Malawi, he had also lauded the “courageous” decision by the country’s leader to pardon a gay couple who had been sentenced to 14 years in prison, voicing hope that the African nation will update its laws to reflect international standards.

Ms. Pillay noted in her own remarks that, despite significant progress made in a number of States, there is still no region in the world today where people who are gay, lesbian, bisexual transgender or intersex (LGBTI) can live entirely free from discrimination or from the threat of harassment and physical attack.

“But in 78 countries, individuals still face criminal sanctions on the basis of their sexual orientation or gender identity,” she told the event, which was held on the sidelines of the 15th regular session of the UN Human Rights Council.

“We should be looking for ways to ensure that everyone enjoys the full protection of international human rights law, not for grounds to justify excluding certain individuals.”

She said the first priority should be decriminalization worldwide, which should be accompanied by greater efforts to counter discrimination and homophobia, including both legislative and educational initiatives.

“If we are all entitled to the full range of human rights and to equal protection of the law then, I believe, it can never be acceptable to deprive certain individuals of their rights, indeed to impose criminal sanctions on those individuals, not because they have inflicted harm on others or pose a threat to the well-being of others, but simply for being who they are, for being born with a particular sexual orientation or gender identity.

“To do so is deliberately to exclude a whole lot of people from the protection of international human rights law. It is, in short, an affront to the very principles of human rights and non-discrimination,” she stated. 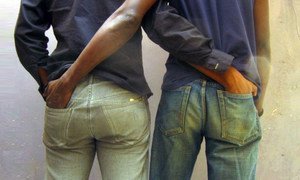 Secretary-General Ban Ki-moon lauded the “courageous” decision announced today by the leader of Malawi to pardon a gay couple recently sentenced to 14 years in prison, voicing hope that the African nation will update its laws to reflect international standards.