UNRWA/Shareef Sarhan
Mud-brick houses being built by UNRWA as temporary shelter for families in Gaza.
23 August 2010

The United Nations Human Rights Council’s international independent fact-finding mission of high-level experts looking into the Gaza flotilla incident on 31 May is visiting Turkey and Jordan to interview witnesses and government officials, it was announced today.

Technical and legal specialists will accompany the three-person mission, chaired by Judge Karl T. Hudson-Phillips, a former judge with the International Criminal Court (ICC), on the two-week visit to the two countries.

Its other members are Sir Desmond de Silva, a former chief prosecutor at the UN-backed Special Court for Sierra Leone (SCSL), and Shanthi Dairiam, a member of the Gender Equality Task Force at the UN Development Programme (UNDP).

The mission has just spent two weeks in Geneva, where it drafted its terms of reference and held talks with diplomats, including the ambassadors of Israel and Turkey.

Last week, they began interviewing witnesses in London and Geneva to gather first-hand information to assess facts under their consideration.

The 47-member, Geneva-based Council voted on 2 June – with 32 votes in favour to three against, and nine abstentions – to dispatch the mission to inquire into incident regarding the flotilla, which had departed Turkey and was bound for the Gaza Strip.

It is slated to present its report at the next session of the Council in September.

Also expected to deliver a report in September is Secretary-General Ban Ki-moon’s panel of inquiry into the incident.

That four-member panel, which started discussions earlier this month on how to carry out its work, is not designed to determine individual criminal responsibility, but to examine and identify the facts, circumstances and the context of the flotilla incident.

As part of that, the panel will receive and review the reports of national investigations into the incident and request clarifications and information as it needs from national authorities.

The former New Zealand prime minister Geoffrey Palmer chairs the panel, while the ex-president of Colombia Alvaro Uribe serves as vice-chair. Joseph Ciechanover is the Israeli representative and Özdem Sanberk is the Turkish representative.

♦ Receive daily updates directly in your inbox - Subscribe here to a topic.
♦ Download the UN News app for your iOS or Android devices.
FLOTILLA 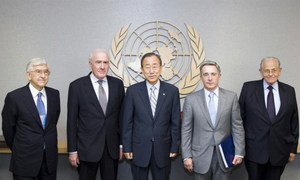 Members of the Secretary-General’s panel of inquiry into the Gaza flotilla incident on 31 May will meet again early next month after starting discussions this week on how they will carry out their work.