The actress and humanitarian activist Mia Farrow is set to give evidence on Monday about blood diamonds that are the current focus of testimony at the ongoing trial of the former Liberian president Charles Taylor at a United Nations-backed war crimes tribunal.

Judges at the Special Court for Sierra Leone (SCSL) will hear from Ms. Farrow and the agent Carole White following evidence given yesterday by the high-profile British model Naomi Campbell.

Ms. Campbell told the SCSL, which is sitting in The Hague in the Netherlands for the trial of Mr. Taylor, that she was given a pouch of “very small, dirty-looking stones” by two unidentified men while staying at the home of the former South African president Nelson Mandela in 1997.

Mr. Taylor, who is on trial on charges of war crimes and crimes against humanity, has long been accused of using blood diamonds to fuel conflict in Sierra Leone while he served as leader of neighbouring Liberia.

A blood diamond is a diamond that is mined in a war zone and then sold to finance the activities of an army, insurgency or warlord, and they have been a feature of many African conflicts in the past two decades.

But Mr. Taylor denies the blood diamond allegations and has pleaded not guilty before the SCSL to 11 charges, including pillage, slavery for forced marriage purposes, collective punishment and the recruitment and use of child soldiers. The charges relate to his alleged support for two rebel groups in Sierra Leone – the Armed Forces Revolutionary Council and the Revolutionary United Front.

Ms. Campbell said yesterday that the men did not introduce themselves when they gave her the pouch while she was trying to sleep at the presidential home following a dinner party held by Mr. Mandela.

Discussing the matter the next morning at breakfast with Ms. Farrow and Ms. White, Ms. Campbell said she was told the stones were likely to be diamonds and from Mr. Taylor, another guest at the dinner party.

The model said she later gave the stones to a representative of the Nelson Mandela Children’s Fund because she wanted them to go to charity. She said she was unaware of Mr. Taylor before the dinner party or the term ‘blood diamond.’

The SCSL was set up jointly by the Sierra Leonean Government and the UN in 2002 and is headquartered in Freetown, the capital. It is mandated to try those who bear the greatest responsibility for serious violations of international humanitarian law and national law committed on Sierra Leonean territory since the end of November 1996. 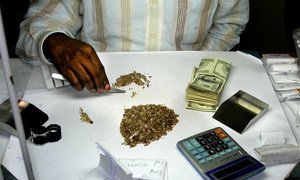 Judges at the United Nations-backed war crimes court in Sierra Leone today ordered the high-profile British model Naomi Campbell to give evidence later this month about a blood diamond in the ongoing trial of the notorious former Liberian president Charles Taylor.