Richard Falk, the Special Rapporteur on the situation of human rights on Palestinian territories occupied since 1967, cited in particular the situation of four Palestinians threatened with the loss of their right of residence, as well as the plan by the Mayor of Jerusalem to demolish 22 buildings housing Palestinians in Silwan as part of a redevelopment of the area.

“These actions, if carried out, would violate international law, with certain actions potentially amounting to war crimes under international humanitarian law,” warned Mr. Falk, who reports to the Geneva-based UN Human Rights Council in an unpaid capacity.

He said it was “disturbing” that Israel is considering revoking the residency permits of the four Palestinians, who are all current or former members of the Palestinian Legislative Council and long-time residents of East Jerusalem. The Israeli High Court of Justice is scheduled to consider their case on 6 September.

“What is particularly shocking is that Israel appears ready to forcibly transfer these individuals based on their supposed lack of loyalty to the State of Israel,” he stated. “Israel, as an occupying Power, is prohibited from transferring civilian persons from East Jerusalem, and is prohibited from forcing Palestinians to swear allegiance or otherwise affirm their loyalty to the State of Israel.”

Last week Secretary-General Ban Ki-moon voiced his deep concern at the news that the municipality of Jerusalem has advanced planning for the demolition of existing homes and the construction of further settlements in Silwan, noting that the planned moves are contrary to international law, and to the wishes of Palestinian residents.

“The Secretary-General reminds the Israeli Government of its responsibility to ensure provocative steps are not taken which would heighten tensions in the city. The current moves are unhelpful, coming at a time when the goal must be to build trust to support political negotiations,” his spokesperson said in a statement issued on Thursday.

Mr. Falk said the situation in Silwan warrants urgent action by the Israeli Government to prevent the occurrence of serious violations of international law, highlighting the fact that East Jerusalem is occupied territory under international law.

“International law does not allow Israel to bulldoze Palestinian homes to make space for the mayor’s project to build a garden, or anything else,” he said.

“This situation should be seen within the context of Israel’s persistent, systematic approach to driving Palestinians out of East Jerusalem, including by denying them permission to construct homes, declaring their homes illegal, forcibly removing families, and then destroying their homes – all to make way for Israeli settlements.” 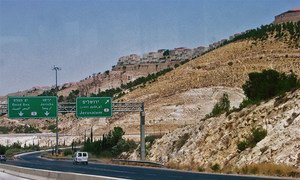 Secretary-General Ban Ki-moon has voiced deep concern at the news that the municipality of Jerusalem has advanced planning for the demolition of existing homes and the construction of further settlements in the Silwan area in the east of the city.