Secretary-General Ban Ki-moon today expressed his shock at the deadly military interception on boats loaded with relief supplies headed for Gaza, calling on Israel to fully explain its actions.

According to media reports, early this morning in international waters, Israeli intercepted and took control of the six-ship aid convoy, which was carrying hundreds of activists from several countries. At least ten people were killed in serious violence on one or more of the vessels.

“I condemn this violence,” Mr. Ban said from Kampala, Uganda, where he presided over the first review conference of the International Criminal Court (ICC).

“It is vital that there is a full investigation to determine exactly how this bloodshed took place,” he said. “I believe Israel must urgently provide a full explanation.”

The Security Council held an emergency session today to discuss the incident.

Assistant Secretary-General for Political Affairs Oscar Fernandez-Taranco told the Council's open meeting that “today's bloodshed would have been avoided if repeated calls on Israel to end the counterproductive and unacceptable blockade of Gaza had been heeded.”

He spotlighted “the scale of unmet needs of Gaza's civilian population,” underlining that “the blockade is unacceptable and counterproductive and must end.”

The incident took place “at a time when all efforts should be focused on the need to build trust and advance Israeli-Palestinian negotiations, and nurture regional cooperation in support of peace,” he said. “It is vital that the proximity talks continue.”

“It has worsened conditions of life for one and a half million Palestinians, deepened poverty and food insecurity, prevented reconstruction, and increased aid dependence by destroying livelihoods and economic activity,” said Mr. Holmes, who also serves as the Under-Secretary-General for Humanitarian Affairs. “It has helped only the extremists.”

Also speaking out against today's events was UN High Commissioner for Human Rights Navi Pillay, who emphasized that “nothing can justify the appalling outcome of this operation.”

Calling for a probe into the incident, she underscored the need for accountability.

“I unequivocally condemn what appears to be disproportionate use of force, resulting in the killing and wounding of so many people attempting to bring much-needed aid to the people of Gaza, who have now been enduring a blockade for more than three years,” Ms. Pillay said.

She called on the Israeli Government to heed the “almost unanimous international view that the continued blockade of Gaza is both inhumane and illegal.”

The blockade, the High Commissioner pointed out, “lies at the heart of so many of the problems plaguing the Israel-Palestine situation, as does the impression that the Israeli Government treats international law with perpetual disdain.”

For his part, Richard Falk, Special Rapporteur on the situation of human rights in the occupied Palestinian territory, said that “Israel is guilty of shocking behavior by using deadly weapons against unarmed civilians on ships that were situated in the high seas where freedom of navigation exists, according to the law of the seas.”

He echoed the calls by the Secretary-General and the High Commissioner for an investigation into today's incident, stressing that it is “essential that those Israelis responsible for this lawless and murderous behavior, including political leaders who issued the orders, be held criminally accountable for their wrongful acts.”

Mr. Falk characterized the blockade of Gaza as a “massive form of collective punishment” that is tantamount to a crime against humanity.

“Unless prompt and decisive action is taken to challenge the Israeli approach to Gaza all of us will be complicit in criminal policies that are challenging the survival of an entire beleaguered community,” he said. 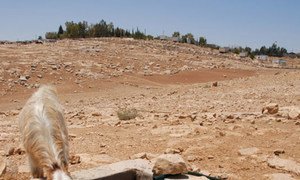 The proximity talks between Israel and the Palestinians earlier this month must be accompanied by steps to foster mutual trust and more positive conditions on the ground, Secretary-General Ban Ki-moon underscored today.