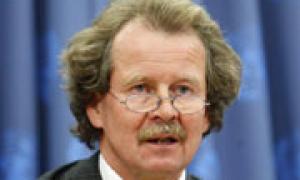 An independent United Nations human rights expert has voiced concern about the “regular practice” of police violence in Papua New Guinea, which he said often reaches the level of torture, as well as appalling conditions for detainees.

Manfred Nowak, the UN Special Rapporteur on torture, made the comments after concluding his 12-day fact-finding mission to the Pacific nation, during which he was able to conduct unannounced visits to places of detention and interview detainees in private.

“My main concerns are systematic beatings of detainees by the police upon arrest and within the first hours of detention, including during interrogation,” he said in a news release issued in the capital, Port Moresby.

“This regular practice of police violence, corroborated by medical evidence, often reaches the level of torture,” added the Special Rapporteur.

Mr. Nowak, who said he received the full cooperation of the Commissioners of Police and Correctional Services during his visit, also highlighted the “appalling” conditions of detention in police lock-ups, where detainees are often kept for many months, amounting to cruel, inhuman and degrading treatment and punishment.

“Detainees are locked-up in overcrowded and filthy cells, without proper ventilation, natural light, access to sufficient food and water for drinking, washing and using the toilets,” he said, adding that, in all police stations, detainees were forced to sleep on the floor.

The expert said the standards of hygiene at Mount Hagen Police Station were “beyond description,” and detainees were forced to urinate and defecate in bottles and plastic bags, which were then picked up by female detainees and piled up in the small common space.

Mr. Nowak was also concerned that “prisoners who escape are subjected to severe punishment, amounting to torture, including through brutal beatings with bush knives and gun butts, shooting detainees at close range and cutting their tendons with axes and bush knives after they are apprehended, with the intent of disabling them.

“The victims are usually kept in punishment cells, without any medical treatment, which sometimes even led to their death,” he added.

Meanwhile, he said the Police Juvenile Policy and Protocols, developed jointly by the Royal Papua New Guinea Constabulary and the UN Children’s Fund (UNICEF), constitutes an excellent tool for dealing with juveniles in conflict with the law.

“Unfortunately, for the most part they are not implemented,” noted the Special Rapporteur, adding that the Juvenile Reception Centre in Boroko, constructed with UNICEF funds and opened in 2009, was not even in use.

As a result, juveniles are being held in police custody together with adults, in contravention of international standards. The expert did add that the Hohola Remand Centre for Juveniles in Port Moresby, run by the Brothers of the Sacred Heart, constitutes a best practice aimed at reintegrating juveniles into society.

The Special Rapporteur also voiced concern that women “hold a very low status in society, placing them at very high risk of abuse, both in the domestic and in the public sphere,” adding that he found cases of women being subjected to sexual abuse in police stations and “exploited for slavery-like services by police officers and male detainees.”

Mr. Nowak reports to the Geneva-based UN Human Rights Council in an independent and unpaid capacity.

♦ Receive daily updates directly in your inbox - Subscribe here to a topic.
♦ Download the UN News app for your iOS or Android devices.
PAPUA NEW GUINEA

Some 10 million detainees around the world are held in appalling conditions and stronger measures are needed to improve prison conditions and ensure full respect for human rights, according to a United Nations expert on torture.