Secretary-General Ban Ki-moon today led United Nations staff and the family and friends of personnel who perished in the Haitian earthquake in honouring the memory of the 101 men and women who made the ultimate sacrifice in the service of the Organization.

“Today, we commemorate the single greatest loss the UN has suffered in its history,” a visibly shaken Mr. Ban stated during the memorial ceremony held at UN Headquarters in New York.

The 7.0-magnitude quake, affecting one third of Haiti’s 9-million strong population, brought down the Christopher Hotel, which houses the UN headquarters in Port-au-Prince, and other buildings hosting the world body’s offices.

“We remember 101 lives of consequence,” Mr. Ban told the gathering, which was also attended by senior officials, representatives of Member States, and colleagues from the UN Stabilization Mission in Haiti (MINUSTAH).

The Secretary-General’s Special Representative to Haiti and head of MINUSTAH, Hédi Annabi, his Deputy Luiz Carlos da Costa and Acting Police Commissioner Doug Coates were among those that were killed.

“We honour 101 unique paths that joined in Haiti to write the larger story of the United Nations,” he said of the diplomats, humanitarians, doctors, drivers, police officers, soldiers and various other professionals who died on 12 January.

Though they came to Haiti from all corners of the world, from all walks of life, they had one thing in common, noted the Secretary-General. “They shared a common conviction… a belief in a better future for the people of Haiti, and a common resolve to help them build it.

“And as they fulfilled their mission in Haiti, they illuminated a profound truth – earthquakes are a force of nature, but people move the world.”

Today’s ceremony featured a reading of the names of the 101 civilians, military and police personnel from 29 countries who died, as well as of a poem written by Ambassador Antonio Pedro Monteiro Lima of Cape Verde about Haiti and a song performed by Haitian singer Emeline Michel.

General Assembly President Ali Treki paid tribute to the fallen, stating that one way to honour their sacrifice is to support the Government and people of Haiti. “The major challenge is to ensure that Haiti can continue to develop… and it is up to the international community to carry out this lofty objective,” he stated.

Haiti’s Ambassador to the UN, Léo Mérorès, expressed his gratitude for the efforts of those who perished, highlighting their invaluable contribution to peace and development in his country. 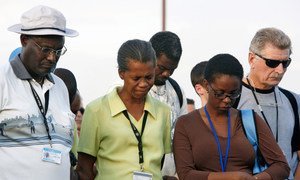 Secretary-General Ban Ki-moon today paid tribute to United Nations personnel who perished in the devastating earthquake that struck Haiti earlier this month, hailing their courage and dedication in the face of catastrophe.