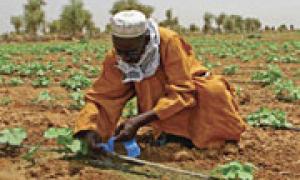 Smallholders and rural producers have a vital role to play in overcoming global hunger and poverty, and new and varied partnerships are needed, with particular emphasis on the interests of women, Secretary-General Ban Ki-moon said today.

“With more than 1 billion people now suffering from hunger, the highest number in human history, there is simply no time to lose,” he told the International Fund for Agricultural Development (IFAD), a specialized United Nations agency dedicated to eradicating poverty in the rural areas of developing countries where 75 per cent of the world’s poorest – or some 1.05 billion people – live.

“The growing international recognition of the role of agriculture and rural development in poverty reduction is helping to build the Global Partnership for Agriculture, Food Security and Nutrition,” he added in a message to the 33rd meeting of the IFAD Governing Council in Rome, referring to a proposed public-private partnership to boost productivity.

Mr. Ban noted that despite the hardships of the global recession, last year saw an upturn in investment in agriculture, along with promises from world leaders of large additional increases over the next three years.

But the food emergency in the Horn of Africa, the plight of Haitians compounded by last months devastating earthquake, and early warnings coming from other parts of the world are constant reminders of the need for both comprehensive and sustained action, he added.

“We need to continue creating diverse and innovative partnerships that can help people and communities achieve greater productivity, nutritional health and self-reliance,” he said. “In this respect we must give pre-eminence to the interests of women, who juggle their time between food production, processing, marketing, child care and balancing the household budget.”

Working with rural poor, governments, donors, non-governmental organizations (NGOs) and many other partners, IFAD focuses on country-specific solutions, which can involve increasing rural poor peoples’ access to financial services, markets, technology, land and other natural resources. For example, the agency most recently granted Chad $19.5 million to finance a water project for nomadic herders in the arid sub-Saharan Sahel region.

♦ Receive daily updates directly in your inbox - Subscribe here to a topic.
♦ Download the UN News app for your iOS or Android devices.
poverty alleviation

Agriculture spurs economic growth, a senior United Nations official said today, ahead of this week’s gathering of the world’s business and political leaders in Davos, Switzerland, where he hopes to give voice to smallholder farmers from Africa, Asia and Latin America.