Humanitarian crisis for Pakistan’s displaced far from over – UN official

The top United Nations humanitarian official in Pakistan has called on the international community not to forget the vulnerable civilians displaced in the country’s northwest, urging donors to contribute to a $537 million appeal launched to meet immediate relief needs.

The Pakistan Humanitarian Response Plan for 2010, put together by the Government, UN agencies, non-governmental organizations (NGOs) and other aid actors, will enable continued assistance in the North West Frontier Province (NWFP) and the Federally Administered Tribal Areas (FATA) for at least another six months.

UN Humanitarian Coordinator for Pakistan Martin Mogwanja urged the international donor community “to keep up their invaluable contributions to enable the humanitarians to continue assisting the people in need in Pakistan.”

A total of 3.1 million people from NWFP and FATA were displaced in 2009 due to Government operations against militants in these areas. The funds sought for the response plan just launched will not only response to the needs of the internally displaced persons (IDPs), but also support those who have returned to their places of origin, those who never left and the families who opened up their homes to host the displaced.

“Considering that the number of IDPs from Orakzai Agency has risen nearly tenfold in the last two months, the emergency in Pakistan seems far from over,” said Mr. Mogwanja.

In addition to providing relief to the IDPs, the main humanitarian activities in 2010 will include the distribution of food, the rehabilitation and reconstruction of damaged infrastructure and assistance to farmers who lost their crops due to hostilities and displacement.

The largest share of the requested funds – $195 million – will be needed for food-related projects, since a large part of the affected population will continue to depend on food aid. Other priority areas include shelter and non-food items, health, water and sanitation, agriculture and the coordination and management of IDP camps, among others.

As of 31 December 2009, last year’s $680 million appeal was 71 per cent funded. Those funds enabled the humanitarian community to reach more than four million people in need of assistance with vital relief including food and drinking water. 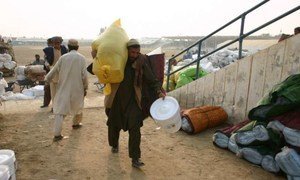 The United Nations refugee agency has rushed assistance to hundreds of thousands of Pakistanis driven from their homes by an intense military assault against militants in South Waziristan since October, including around 35,000 tents and 54,000 aid kits.