UN Photo/Sophia Paris
Staff members from the UN Stabilization Mission in Haiti (MINUSTAH) observe a moment of silence for their fallen colleagues during a memorial service in Port-au-Prince, Haiti.
28 January 2010
Humanitarian Aid

Secretary-General Ban Ki-moon today paid tribute to United Nations personnel who perished in the devastating earthquake that struck Haiti earlier this month, hailing their courage and dedication in the face of catastrophe.

“You, yourselves, lost loved ones,” Mr. Ban said in a message to a memorial service for staff members of the UN Stabilization Mission in Haiti (MINUSTAH) in the capital, Port-au-Prince. “Yet your thoughts were with those who could yet be saved.”

Yesterday, he put the UN death toll at 83, with 32 people still unaccounted for.

“In the face of such terrible adversity, you showed your humanity and your strength,” the Secretary-General said in his address, delivered by his acting Special Representative Edmond Mulet.

His two top envoys – Hédi Annabi and Luiz Carlos da Costa – were both killed in the quake, which registered 7.0 on the Richter scale.

Days after the disaster, Mr. Ban travelled to Haiti to show his support to the country’s people and to UN staff, returning to New York with the bodies of Mr. Annabi and Mr. da Costa, an experience which he said was one of the saddest in his life, but also one of “the most privileged.”

In his message to MINUSTAH staff members, he stressed, “we are with you in spirit. To those no longer with us, I say: we will never forget you.”

Once all of the fallen UN personnel have been recovered, a memorial service will be held in New York, where their names will be read out, the Secretary-General announced today.

In Geneva, the Human Rights Council today adopted a resolution calling for the international community to supporting the people and Government of Haiti, stressing the importance of taking a human rights approach to the relief and recovery effort.

During a special session, the 47-member body expressed its concern over the rights situation in the country, calling for children to be protected from violence, injury, abuse and exploitation.

In the capital, MINUSTAH Police carried out almost 300 security patrols, assisted with 10 humanitarian escorts and provided security for dozens of banks which re-opened for business at the end of last week.

The Office for the Coordination of Humanitarian Affairs (OCHA) reports that hundreds of thousands of people still need food and shelter. Thousands of stoves are required to transition from providing ready-to-eat meals to dry rations of rice and beans.

On health, the World Health Organization (WHO) notes that tetanus and suspected measles cases have been reported in Léogâne, a city just to the west of Port-au-Prince. A vaccination campaign for diphtheria, tetanus and measles will kick off next week.

For its part, the UN Children’s Fund (UNICEF) is registering unaccompanied children found on the streets of the capital, with plans to shortly start tracing their families’ whereabouts. The agency has also set up so-called safe spaces for these children to protect them until their families are found or alternative arrangements are made.

In a related development, the UN Environment Programme (UNEP) has identified major short- and longer-term environmental issues in Haiti, including an ever-increasing amount of medical waste, with no systems or equipment in place to dispose of potentially hazardous materials.

The agency also warned of the large volume of rubble, which could be in the tens of millions of ton, as well as the risk of landslides, which have already been witnessed on hillsides and could worsen after the season’s first heavy rains. 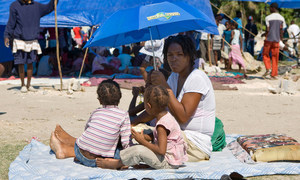 While United Nations agencies and their partners are providing immediate assistance to the survivors of Haiti’s earthquake, they are also stressing the need to ensure that those dealing with physical and emotional scars from the disaster receive the long-term support they need.