The United Nations refugee agency today asked the Government of Laos for access to some 4,000 ethnic Hmong Laotians who were deported from Thailand yesterday although many had been there for over 30 years and some were recognized as being in need of international protection.

The UN High Commissioner for Refugees (UNHCR) has no formal presence in Laos. Many Hmong living in the highlands of Laos took part in the conflict that engulfed the country in the 1960s and 1970s. When the Pathet Lao came to power in 1975, tens of thousands fled to Thailand in search of asylum, while others were resettled in Western countries such as the United States.

Secretary-General Ban Ki-moon today voiced his concern that the deportations had taken place despite appeals from the UNHCR and the availability of third country resettlement solutions for those recognized as refugees. “He urges the Governments of Thailand and the Lao People's Democratic Republic to take all necessary steps to respect the rights of those concerned and to facilitate humane solutions,” he said in a statement issued by his spokesman.

Yesterday, High Commissioner António Guterres called on the Thai Government to halt the forced returns, but to no avail.

Despite its long history as a country of asylum, Thailand deported the Hmong from two camps, one in the northern province of Petchabun and another in Nong Khai in the northeast. UNHCR was given no access to people in the first camp, while those in Nong Khai were all recognized by the agency as refugees.

“UNHCR is also calling on the Government of Thailand to provide details of assurances received from the Government of the Lao People’s Democratic Republic within the framework of a bilateral agreement between the two governments concerning the treatment of the returned Lao Hmong,” the agency said in a news release today.

“UNHCR has asked to be informed of steps taken by the Government of Thailand to ensure that commitments made under this framework are effectively honoured.”

The agency said it has long maintained that the process of repatriation should be transparent and that no one with a valid protection claim should be forcibly returned to Laos.

♦ Receive daily updates directly in your inbox - Subscribe here to a topic.
♦ Download the UN News app for your iOS or Android devices.
Hmong 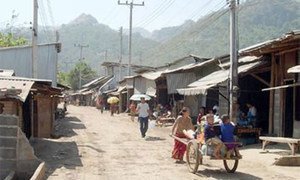 The head of the United Nations refugee agency has expressed dismay as Thai authorities began the forced deportation today of thousands of ethnic Hmong back to neighbouring Laos.