The top United Nations envoy to Iraq met today with parliamentarians from the Kurdish Alliance Bloc to discuss the recently brokered electoral laws that allow for national elections expected to take place early next year.

The compromise in the electoral law centres on the allocation of seats in parliament, which the Secretary-General's Special Representative Ad Melkert and the Kurdish lawmakers reaffirmed would be used exclusively for the 2010 Council of Representatives election.

Since the Council of Representatives finalized the amendments to the law by 6 December, the UN Assistance Mission in Iraq (UNAMI) – which Mr. Melkert heads – has advised all parties that it is feasible to hold the elections on 27 February 2010.

National polling was originally slated for January, but the electoral law was vetoed by the Sunni member of Iraq's three-member Presidency Council last month and was sent back to the Council of Representatives.

In today's meeting, both sides stressed the importance of gathering census data in 2010 to support long term planning for the rebuilding and prosperity of Iraq, agreeing that the census data should be used for the development of proper civil and voter registries.

Mr. Melkert reiterated the UN's support to reach a satisfactory and sustainable political agreement on these issues in order to promote security, stability and democracy in Iraq. 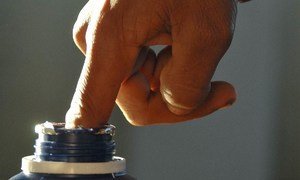 The United Nations mission in Iraq is trying to help the country’s leaders resolve differences over national elections that have delayed holding the poll by its constitutional deadline of January.