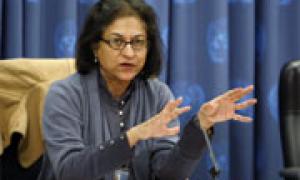 Asma Jahangir, the Special Rapporteur on freedom of religion or belief, wrapped up a week-long visit to Laos by calling on authorities in the South-East Asian country to sustain and foster respect for religious diversity.

“The test of freedom of religion or belief lies with the level of tolerance extended to religious minorities,” she said in a statement issued in Vientiane, the capital.

She voiced concern that religious minorities appear to have little or no access to higher education and other opportunities.

A “glass ceiling in terms of their promotion in public service and their participation in decision making” exists, Ms. Jahangir added, warning that religious minorities must not be marginalized.

The Special Rapporteur met with both Government officials and private citizens during her visit but she said some people told her they engaged in self-censorship and were hesitant about approaching authorities on religious matters.

She stated that her office has received serious allegations in the past decade about the treatment of religious followers, including reports of official campaigns aimed at forcing Christians to renounce their faith and arrests made on the basis of religion.

Lao authorities acknowledged to Ms. Jahangir that some incidents had occurred, but assured her that they would not be tolerated in the future and that fresh instructions have been passed down to lower-level officials.

In her statement the Special Rapporteur welcomed Laos’ recent ratification of the International Covenant on Civil and Political Rights (ICCPR), which bans religious discrimination and unreasonable restrictions on the movements of individuals, including in their exercise of religious freedom.

Ms. Jahangir serves in an unpaid and independent capacity as a Special Rapporteur and reports to the UN Human Rights Council, which is based in Geneva.

The United Nations refugee agency today called for an end the detention of 158 Lao Hmong, who have been held ever since they were rounded up in Bangkok for deportation three years ago.