16 November 2009
The Somali Government and the African Union force in the country need more help on land to fight piracy in the waters, Secretary-General Ban Ki-moon says in a new report released today.

“One of the ways to ensure the long-term security of international navigation off the coast of Somalia is through a concerted effort to stabilize the situation ashore, as pirates have become more sophisticated in their methods and techniques of attacking,” he states.

In the report to the Security Council on the situation of piracy and armed robbery in territorial waters and high seas off the coast of Somalia, Mr. Ban noted that the expanding maritime presence by Member States is playing a critical role in stabilizing the situation in the Gulf of Aden.

At the same time, he calls for an integrated approach that would strengthen the capacities of the Somali Transitional Federal Government (TFG) and the African Union Mission in Somalia (AMISOM) on land.

The approach should include further development of law and security institutions to complement the ongoing peace process in the strife-torn nation, including for the investigation and prosecution of those suspected of acts of piracy and armed robbery at sea.

In this regard, the Secretary-General welcomes the initiative by INTERPOL and Member States to look into the financial mechanisms that provide funding for piracy activities.

He also noted that it would be important for Somali authorities to continue to provide sustainable livelihoods to their people in order to address the roots causes of piracy and armed robbery at sea.

In a related development, the Security Council was briefed today in a closed meeting by Ambassador Claude Heller of Mexico, who chairs the sanctions committee for Somalia.

Council members strongly condemned the recent increased fighting and loss of life in Somalia, in a statement read out to the press after that meeting by Ambassador Thomas Mayr-Harting of Austria, which holds the rotating Council presidency for this month.

They “reiterated their continued and full support to the Transitional Federal Government, its efforts to achieve peace, security and reconciliation through the Djibouti Peace Process, and the work of the African Union Mission in Somalia (AMISOM),” said the statement.

At UN food summit, Ban lays out steps to save billions from hunger 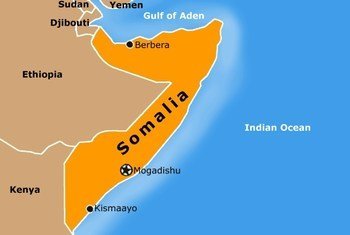 2 November 2009
The head of the United Nations International Maritime Organization (IMO) has pledged that his agency will help Somalia repress piracy off its coast and in the Gulf of Aden, including through assisting in the creation of a national coast guard.