The head of the United Nations Educational, Scientific and Cultural Organization (UNESCO) has condemned the murder of Mexican journalist Vladimir Antuna García, and called on authorities to bring the perpetrators to justice.

The head of the United Nations Educational, Scientific and Cultural Organization (UNESCO) has condemned the murder of Mexican journalist Vladimir Antuna García, and called on authorities to bring the perpetrators to justice.

Mr. García, whose body was found in the city of Durango on 2 November, was a crime correspondent for El Tiempo de Durango newspaper.

UNESCO Director-General Koïchiro Matsuura expressed concern that the ability of journalists to pursue their professional activities and exercise the fundamental human right of freedom of expression is severely impeded in the “climate of fear” created by the recent wave of killings in Mexico.

“I trust that the authorities will spare no effort in identifying and prosecuting the culprits of these crimes that undermine society as a whole, setting unacceptable limits to democracy, good governance and rule of law,” he stated.

According to the International Press Institute (IPI), Mr. García had reported receiving death threats in recent months, and on several occasions a caller allegedly identified himself as a member of a local crime gang with known links to a drug cartel.

He had escaped an attack in April, one month before his El Tiempo de Durango colleague, Carlos Ortega Samper, was shot dead by unidentified gunmen. IPI added that Mr. García is the seventh journalist to be murdered in Mexico this year.

Just last month, the body of radio presenter Fabián Ramírez López was found in the coastal city of Mazatlán after an anonymous telephone call to La Magia 97.1, the radio station where he worked.

♦ Receive daily updates directly in your inbox - Subscribe here to a topic.
♦ Download the UN News app for your iOS or Android devices.
UNESCO|journalist 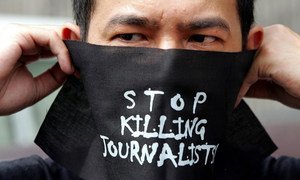 UNESCO head speaks out against murder of Mexican reporter

The head of the United Nations agency tasked with upholding press freedom today condemned the killing of a radio presenter in Mexico, stressing that the murder affects the whole of Mexican society.