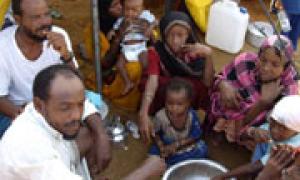 On the heels of a four-nation trip to see first-hand the damage caused by conflict and natural disasters, the top United Nations humanitarian official today appealed for international support to help these countries recover and rebuild.

The conflict in northern Yemen, which he visited earlier this month, remains “pretty neglected” both by the international community and the media, John Holmes, Under-Secretary-General for Humanitarian Affairs, told reporters.

More than 50,000 people have been uprooted since the fighting between the Government and Al Houthi rebels resumed in earnest in August, bringing the total number of people forced from their homes since the conflict first started in 2004 to 150,000.

“There’s no doubt from the humanitarian angle that the situation is getting worse,” Mr. Holmes said.

UN requests to both the Government and rebels for a humanitarian pause in fighting to allow urgently-needed supplies to reach civilians have so far been unsuccessful, he noted.

Further, the official pointed out that just over 36 per cent of the $24 million flash appeal for Yemen launched last months has been funded so far.

Also facing a funding shortfall are the appeals for the Philippines and Indonesia, which he also visited this month.

The Philippines was battered by successive storms which affected over 6 million people, killing some 800 people and displacing scores of thousands of others, and caused crop damage estimated at over $160 million.

With fears of communicable disease outbreaks high and water levels still high in some areas, Mr. Holmes said that “there is quite a long way to go” in recovery. Only one third of the $74 million appeal has been secured, he told reporters.

The $38 million appeal for Indonesia, where a recent 7.9-magnitude earthquake claimed over 1,100 lives and damaged 200,000 homes, is also under-funded, he said.

Mr. Holmes, who also serves as the UN’s Emergency Relief Coordinator, urged donors for their support as the long-term rebuilding operation in the South-East Asian nation gets under way.

Also in need of increased international assistance is Uganda, which he visited last week and met victims of the notorious rebel group known as the Lord’s Resistance Army (LRA) in the north of the country.

“The good news there is that 85 per cent of the 2 million IDPs [internally displaced persons] who had been displaced have been able to go home,” the Under-Secretary-General said.

With the LRA – currently wreaking havoc in neighbouring nations – having left northern Uganda, emergency relief efforts are winding down, but support is vital to make sure that basic services and facilities are in place in areas of return, and “there is still a long way to go,” he emphasized.