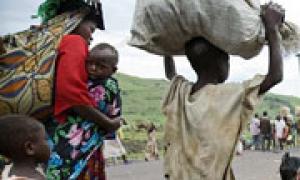 The United Nations human rights chief today welcomed a new treaty to protect and assist those uprooted from their homes due to conflict and natural disasters in Africa, which accounts for nearly half of the world's 26 million internally displaced persons (IDPs).

“The endorsement of the Convention on the Protection and Assistance of Internally Displaced Persons in Africa marks a significant step forward in filling the unfortunate vacuum that has traditionally been the lot of internally displaced people,” said High Commissioner for Human Rights Navi Pillay.

The new treaty was endorsed today at the special summit of heads of State of the African Union (AU), held in the Ugandan capital, Kampala.

“It is very good to see Africa taking a leadership role in creating the first legally-binding instrument to protect and assist internally displaced persons across the continent,” Ms. Pillay said.

Millions of Africans – in countries such as Chad, the Democratic Republic of Congo (DRC), Kenya, Somalia and Sudan – are displaced due to conflict and natural disasters.

Ms. Pillay noted that people who flee persecution or conflict and cross into another country are categorized as refugees and, as such, benefit from a long-standing international legal protection system, including the 1951 Refugee Convention.

“But, until now, internally displaced people have been more or less excluded from the system of international legal protection, even though they are often displaced in exactly the same way, and for exactly the same reasons, as refugees.

“At least in Africa, that should no longer be the case,” she stated, adding that she hoped the other regions will be inspired to take similar action.

According to the UN High Commissioner for Refugees (UNHCR), the Convention is ground-breaking in that it is the first, legally binding instrument to define – on a continental scale – the responsibilities that States and even armed groups have to protect and assist their own uprooted citizens.

“Beyond armed conflict, the Convention covers major causes of displacement, including obligations that governments have toward their citizens fleeing natural and man-made disasters and people removed from their land when development projects take over,” said UNHCR spokesperson Andrej Mahecic.

“People forced to flee will find in the Convention the full range of rights they should be entitled to – before, during and after displacement.”

At least 15 AU member States will have to ratify the Convention before it can enter into force.

Secretary-General Ban Ki-moon today pledged full United Nations support to help Africa address the needs of some 14 million refugees and internally displaced people (IDPs) driven from their homes by fighting and prevent the conflicts that caused their plight.