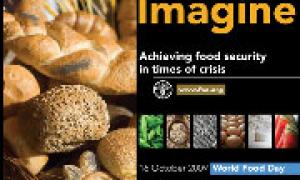 Urging world leaders to boost efforts to help the record number of hungry people around the world, top United Nations officials today underscored the need to prioritize immediate food aid for the one in six of the global population who are malnourished.

The flow of food aid is at its lowest for 20 years, while the number of hungry has grown to its highest point ever, pushing past one billion people.

“Over the past two years, volatile food prices, the economic crisis, climate change and conflict have led to a dramatic and unacceptable rise in the number of people who cannot rely on getting the food they need to live, work and thrive,” said Secretary-General Ban Ki-moon in a message marking World Food Day.

“We must respond to the needs of the hungry, first by ensuring adequate political and financial support for emergency food assistance,” stressed Mr. Ban.

This year the World Food Programme (WFP) has set out to feed 108 million people across 74 countries, but a severe budget shortfall has meant reduced rations for many of the hungry and the suspension of feeding schemes in some countries.

WFP noted that so far this year international donors have contributed $2.9 billion to its $6.7 billion 2009 budget.

“We can change this. Our challenge is to turn ‘No Food Day’ back into ‘World Food Day for the hundreds of millions without food on their table tonight,” said Ms. Sheeran.

She said that for decades WFP has provided emergency food assistance to around 10 per cent of the world’s hungriest men, women and children, but this year – for the first time – the agency is unlikely to reach that target.

As the UN’s largest emergency relief agency, WFP’s resources have been stretched this year by a number of unforeseen humanitarian disasters, such as recent flooding in the Philippines, the need to expand food voucher programmes in the occupied Palestinian territory and a recent eruption of a long-running conflict in northern Yemen between Government forces and Al Houthi rebels that has forced 150,000 to flee their homes.

“The silent crisis affecting one sixth of the all of humanity is also leaving a serious impact on this region,” said Daly Belgami, WFP Director in the Middle East, Eastern Europe and Central Asia.

In addition to addressing the aftermath of natural disasters, Mr. Belgami said that WFP also has programmes aimed at improving children’s access to education and helping local economies by purchasing food locally. “Donor support is needed to maintain this level of assistance to the most vulnerable in this region.”

In his address marking the Day, Director-General of the Food and Agricultural Organization (FAO) Jacques Diouf called on world leaders to reach a “broad consensus on the total and rapid elimination of hunger” when they gather in Rome for the World Summit on Food Security of Heads of State and Government on 16-18 November.

Mr. Diouf also urged leaders to agree to increase agriculture’s share of official development assistance (ODA) to 17 per cent, the level it was in 1980, from its current 5 per cent.

“That amount of $44 billion of official development assistance that we need to devote to agriculture development is very low compared with the $365 billion spent in 2007 to support agriculture in the rich countries, the $1,340 billion spent by the world each year on armaments and the trillions of dollars found in short order in 2008–2009 to prop up the financial sector,” said Mr. Diouf.

However, Ghana, Malawi, Mozambique, Uganda, Viet Nam, Thailand and Turkey have provided cause for hope by significantly reducing the number of undernourished people in their countries over the last five years, he said.

“This means that we know what should be done and how it should be done,” said Mr. Diouf. “Generally, programmes, projects and plans exist and are simply waiting for the political will and resources to become operational.”

Another priority strategy to combat world hunger outlined by Mr. Ban in his message, was the need to invest in food production and distribution, including the provision of safety nets and assistance for smallholder farmers and support for longer-term agricultural productivity, market access and fair trade.

He said that next month’s food summit in Rome is another opportunity to focus on country-led and regional strategies, country-level partnerships and increased levels of assistance.

“I encourage all nations to pursue coordinated and comprehensive strategies for agricultural development and effective social protection so that vulnerable people – women and children in particular – can get the food they need for nutritional security and well-being,” said Mr. Ban.

Also on World Food Day, WFP highlighted an international video competition, called “Hunger Bytes,” for students, aspiring film-makers and professionals to raise awareness about the levels of malnutrition around the world.

The competition, hosted by YouTube, encourages people of all backgrounds to submit short, thought-provoking and unique videos of less than one minute on hunger. Participants can increase their chances of winning by sharing the link with friends and online communities such as Facebook, MySpace and through blogs.