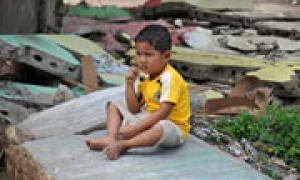 The three-month plan targets some of the most affected areas including Padang City and Pariaman City, with 11 UN agencies, the International Organization for Migration (IOM) and 18 international non-governmental organizations (NGOs) requesting funds for 74 projects, the UN Office for the Coordination of Humanitarian Affairs (OCHA) said.

As international search and rescue teams continued to depart and an increasing number of humanitarian teams arrived in Padang, the focus of the UN Disaster and Assessment Coordination (UNDAC) team has shifted to humanitarian coordination.

As of 8 October, Indonesian authorities have confirmed 739 deaths, 296 people missing, and 2,219 people injured, OCHA said. The reported number of damaged houses has increased to 234,395 and helicopters have carried out at least 13 trips to remote areas where people had not yet received aid.

The UN Children’s Fund (UNICEF) said 70,000 children, or 40 per cent of the town’s school population, had returned to school in Padang.

“Many children had expressed their fears for the future – of more earthquakes, more building collapses, the inability to rebuild their lives,” spokesperson Veronique Taveau told a news briefing in Geneva.

UNICEF is supporting efforts to reassure and comfort these children by protecting their health and assisting the early reopening of schools. Safeguarding water supplies and ensuring proper sanitation and hygiene in affected communities is of paramount importance, she added.

According to the latest figures, 1,138 classrooms had been severely damaged, 580 moderately damaged, and 548 slightly damaged, leaving an estimated 90,000 children in need of education support. UNICEF has asked for $3 million in funding to help in the fields of water and sanitation, health, nutrition, education, child protection, communication and advocacy, and emergency cooperation, Ms. Taveau noted.

United Nations emergency personnel in Indonesia’s province of West Sumatra are mobilizing to prevent the outbreak of epidemic diseases and get children back to school two days after a massive earthquake killed at least 1,100 people, trapped and injured many thousands more, and destroyed numerous buildings.