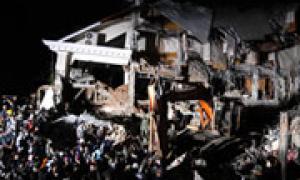 United Nations emergency personnel in Indonesia’s province of West Sumatra are mobilizing to prevent the outbreak of epidemic diseases and get children back to school two days after a massive earthquake killed at least 1,100 people, trapped and injured many thousands more, and destroyed numerous buildings.

“Every one of those children is acutely vulnerable to potential disease, lack of shelter, disruption to education, and the traumatic effects of living through such an experience,” UN Children’s Fund (UNICEF) Country Representative Angela Kearney said, noting that up to a third of those affected are believed to be youngsters.

UNICEF is working with the Government and other UN agencies to aid up to 50,000 families with water pumps, water storage equipment, 40,000 jerry cans and 40,000 hygiene kits, as well as supplying 250 school tents, schools-in-a-box and recreational kits to help children re-establish a sense of normalcy after the tragedy. These initial supplies are expected to reach the quake zone in the next 24 hours.

“Children are always the most affected by emergencies, and it is critical that they have access to clean water, and are protected from the threat of diarrhoeal diseases, acute respiratory infections and outbreaks of vaccine-preventable diseases such as measles, polio and tetanus,” Ms. Kearney said. “At the same time, we must ensure that other services such as education are re-started as soon as possible.”

According to initial Government estimates, Wednesday’s quake, measuring 7.6 on the Richter scale, forced tens of thousands of people to leave their homes in the coastal provincial capital of Padang and surrounding highlands. Access to the affected area is limited due to the availability of only a single airstrip.

The UN World Food Programme (WFP) is preparing for an expected aid request from the Government and already has more than 3,000 metric tons of food in warehouses throughout Indonesia.

The United Nations is rushing teams to Indonesia to survey the damage in the wake of a massive earthquake, as a senior official with the world body called for global unity in responding to a series of deadly natural disasters that have struck Asia in recent days.