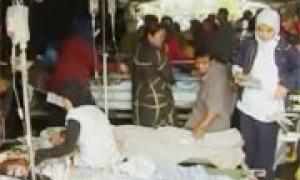 The United Nations is rushing teams to Indonesia to survey the damage in the wake of a massive earthquake, as a senior official with the world body called for global unity in responding to a series of deadly natural disasters that have struck Asia in recent days.

A quake measuring 7.6 on the Richter scale struck the island of Sumatra on Wednesday, followed by a series of other strong quakes.

Some 1,100 people have been killed by the tremors, with thousands trapped under rubble and still more left homeless.

The Indonesian Government’s announcement of a two-month emergency phase is an “indication of the severity of this crisis,” he said.

A UN team – comprising members from the World Health Organization (WHO), the UN Children’s Fund (UNICEF) and others – has arrived in the city of Padang, with a population of nearly 1 million, in Sumatra.

A UN Disaster Assessment and Coordination (UNDAC) mission is set to arrive in the area tomorrow.

The Government, which has mobilized an emergency fund of $10 million so far, has said it welcomes international assistance, with telecommunication, electricity and water supplies having been cut off. Roads have been cut off due to landslides.

“When nature strikes with such force, the world must come together,” Josette Sheeran, Executive Director of the World Food Programme (WFP), said in a statement.

Secretary-General Ban Ki-moon offered his condolences to victims of the Indonesian quake and their families in his own statement, adding that he is closely following reports of the impact of the disaster.

The string of calamities in Asia underpin the need for nations to reach agreement on a new pact to curb greenhouse gas emissions this December in Copenhagen, Denmark, as “climate change will only increase the magnitude and frequency of weather-related disasters,” Noeleen Heyzer, Executive Director of the Bangkok-based UN Economic and Social Commission for Asia and the Pacific (ESCAP), said in a press release.

The penultimate round of UN-backed negotiations before the start of the Copenhagen conference is under way in Bangkok, where a new World Bank study putting the annual price tag for adaptation to global warming in developing countries at between $75 billion to $100 billion over the next four decades.

The preliminary findings of the Economics of Adaptation to Climate Change study estimated the expense under two alternative future climate scenarios – “dry” and “wet” – with adaptation measures costing $75 billion annually in the relatively dryer scenario and $100 billion for the wetter climate picture every year from 2010 to 2050.

The highest adaptation costs, it said, will be borne by the East Asia and Pacific Region, followed closely by Latin America and the Caribbean, and sub-Saharan Africa, the report found. The drier scenario requires lower adaptation costs in all regions, except South Asia.

Devastating back-to-back earthquakes have rocked the Indonesian island of Sumatra today, killing at least 75 people and leaving thousands trapped under the rubble of collapsed buildings, the United Nations humanitarian wing has reported.