Secretary-General Ban Ki-moon today led a call for governments to build inclusive societies that emphasize participation, self-fulfilment, independence, care and dignity for people of all ages, especially the elderly.

In a message marking the 10th anniversary of the International Day of Older Persons, observed annually on 1 October, Mr. Ban noted that the motto “towards a society for all ages” was adopted in 1999 and reaffirmed at the Second World Assembly on Ageing in 2002.

“We have campaigned for policies that will enable older persons to live in an environment that enhances their capabilities, fosters their independence, and provides them with adequate support and care as they age,” said Mr. Ban.

He stressed that this emphasis takes on even greater importance as the world struggles to confront global food, energy, climate, financial and economic crises.

“We must put an end to age discrimination, abuse, neglect and violence against older persons,” said Mr. Ban. “I urge states to put the necessary legal protections in place, and I urge all partners to help countries develop the capacity and institutions to achieve this objective.”

United Nations Independent Expert on human rights and extreme poverty, Magdalena Sepúlveda, underscored the importance of Government-run social pension schemes and protection systems, in her message for the Day.

“It is high time to kill the myth of pensions being unaffordable for poor countries,” said Ms. Sepúlveda, noting that non-contributory pensions are the simplest way to keep older persons out of poverty.

“We only need to look at the achievements in any of the 46 middle- and low-income countries that have social pensions,” she said. “Social pensions not only improve the living conditions of older persons, but also that of their families. So they benefit society as a whole.”

Ms. Sepúlveda said that four other persons benefit from a social pension on average, which in turn contributes to the economic development of poor communities. Children living with pensioners tend to be better nourished and more likely to attend school than those living with older relatives where no pension scheme exists.

“Most States have been neglecting for years their obligations under the right to social security, for example by not ensuring that poor people who worked in the informal economy all their lives can count on a basic, non-contributory, pension,” said Ms. Sepúlveda. “Older people deserve more.”

♦ Receive daily updates directly in your inbox - Subscribe here to a topic.
♦ Download the UN News app for your iOS or Android devices.
elderly 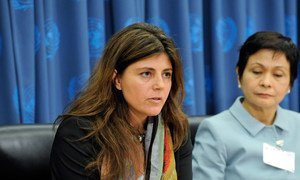 An independent United Nations human rights expert has called on the Zambian Government to make good on its promises to reduce the deep poverty in the Southern African nation.