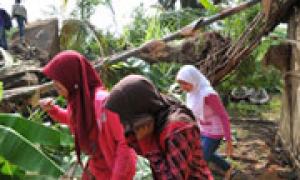 Devastating back-to-back earthquakes have rocked the Indonesian island of Sumatra today, killing at least 75 people and leaving thousands trapped under the rubble of collapsed buildings, the United Nations humanitarian wing has reported.

A powerful 7.9-magnitude tremor, originating from the same fault-line that produced the Indian Ocean tsunami in 2004, struck near the city of Padang at 5:16 pm local time, and was followed by a quake measuring 6.2 about 22 minutes later.

Initial reports indicate significant damage to infrastructure and there have also been media reports of several fires in the affected areas along with temporary airport closures in Padang, said the UN Office for the Coordination of Humanitarian Affairs (OCHA).

A team of UN agencies will be dispatched to the affected areas in West Sumatra tomorrow to assess emergency relief needs of the population, as well as the damage to the area. OCHA also said that it has offered its services to the Government of Indonesia.

In a statement issued by his spokesperson, Secretary-General Ban Ki-moon offered his condolences to the victims of the quake and their families, and said he was closely following reports of the impact of the disaster.

At the beginning of the month a 7.3-magnitude quake hit the Tasikmalaya district of West Java, Indonesia, killing at least 64 people and uprooting another 25,000.

The death toll from the massive earthquake which struck Indonesia earlier this week has risen to 64, with dozens of others believed to be missing, the United Nations humanitarian wing reported today.