A top United Nations official has called for restraint following recent incidents in southern Lebanon, including the wounding of several of the world body’s peacekeepers during an investigation into an explosion at an arms cache last week.

Fourteen soldiers serving with the UN Interim Force in Lebanon (UNIFIL) were reportedly injured, and some UN vehicles damaged, on Saturday when protesters tried to stop the investigation in the area of Khirbat Silim.

“We really need now to lower the temperature, to try and address the issues and not see any escalation which would be bad for 1701 and for Lebanon,” Michael Williams, the UN Special Coordinator for Lebanon, said following his meeting yesterday with Prime Minister Fuad Siniora.

Security Council resolution 1701, which helped to end the 2006 war between Israel and Hizbollah, called for renewed respect for the Blue Line separating the Lebanese forces and Israeli Defense Forces (IDF), the disarming of militias and an end to arms smuggling, among other elements.

Last week UN spokesperson Marie Okabe told reporters that the incident of the explosions constitutes a serious violation of resolution 1701, notably with regards to the provision that there should be no presence of unauthorized assets or weapons in the area of operation between the Litani River and the Blue Line.

“Clearly there were violations of 1701,” said Mr. Williams, who discussed the incidents in a series of meetings over the past two days with senior Lebanese officials. In addition to Mr. Siniora, he also met with Prime Minister-designate Saad Hariri, and with Assembly Speaker Nabih Berri.

After his meeting with Mr. Hariri, the Special Coordinator stated, “Any resolution from time to time faces many tests and challenges. There have been some testing incidents in recent days.

“I take this opportunity to call on all parties to renew their commitment and to exercise the utmost restraint.”

Mr. Williams also called again on Israel to put an end to its air violations of the Blue Line, which he said Lebanon is subject to “on a daily basis.” 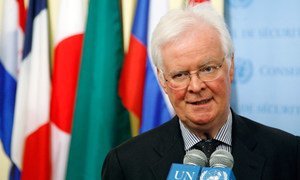 The formation of new Governments in Lebanon and Israel bodes well for the implementation of the Security Council resolution that helped to end their 2006 war, a senior United Nations envoy said today, while lamenting the lack of progress on several key outstanding issues.