Senior United Nations officials marked World Refugee Day on Saturday with a call for greater efforts to protect the over 42 million people worldwide forced to flee violent conflict and persecution, many lacking basic humanitarian needs, such as shelter, clean water and food.

“The theme for this year's observance of World Refugee Day – 'real people, real needs' – underscores how much refugees have lost and how much the humanitarian community must do to help them,” said Secretary-General Ban Ki-moon in a message for the Day.

Malnutrition levels and mortality rates are frequently higher in displaced populations, and single women and girls are especially vulnerable to exploitation, he said.

Noting that staying in school reduces exposure to such abuse, Mr. Ban stressed that more “resources are need to build and maintain education facilities for refugees.”

The Secretary-General said that meeting these and many other needs of refugees and internally displaced persons (IDPs) takes commitment and action. “Solidarity must be the foundation of our response ... especially so at a time when the economic crisis is putting pressure on humanitarian and development budgets.”

UN High Commissioner for Refugees (UNHCR) António Guterres said that this is a time of global uncertainty, which is particularly heightened for refugees and IDPs who have lost “not only their livelihoods and homes, but their loved ones, their friends, their communities and their countries.”

Refugee children who fled the Central African Republic (CAR) to neighbouring Cameroon where mortality rates are sometimes seven times higher than the emergency level, are one of the many vulnerable groups, Mr. Guterres said in a message for World Refugee Day.

He described the situation in Georgia, where IDPs have been living for 15 years in “squalid, overcrowded collective centres lacking water, insulation from the cold and functioning sewage systems,” highlighting conditions suffered by refugees and displaced worldwide.

With adequate resources, much of the hardship can be minimized, said Mr. Guterres. “But without that support, we are forced daily to make heart-breaking decisions that directly affect the lives and well-being of the millions of uprooted families we are charged with protecting.”

Hollywood actress and UNHCR Goodwill Ambassadors, Angelina Jolie, who has produced a 30 second video for the Day, said that as an American she understood the “strength that diversity has given my country – a country built by what some would now dismiss as asylum-seekers and economic migrants.”

Speaking at an event in Washington, DC, observing the Day, Ms. Jolie said that refugees “must not be simply viewed as a burden. They are the survivors. And they can bring those qualities to the service of their communities and the countries that shelter them.”

Other events designed to draw attention to the plight of refugees on Saturday include a concert at Washington's Kennedy Centre by Congolese vocalist and bandleader Samba Mapangala, a football match between refugees in Australia, a musical performance by Kurdish refugees from Iran in northern Iraq and a film festival in Japan.

Between 9am and 9pm (EST) in the United States, or 2pm and 2am (GMT) in the United Kingdom, a new website, www.refugeedaylive.org, will feature live streams from Iraq, Pakistan, a refugee camp in Africa and a settlement for the displaced in Colombia. 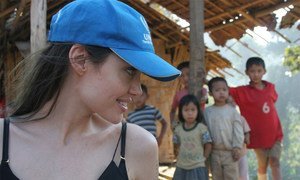 The United Nations refugee agency said today that the number of people forced to flee their homes because of deadly violence and persecution stood at 42 million worldwide at the end 2008.