“The prospects for renewable energy have never looked better, even in the face of recession,” said General Assembly President Miguel D’Escoto.

Mr. D’Escoto voiced hope, especially for the most vulnerable, that the global economic downturn will end before too long. “It would be an enormous step forward if this recovery were coupled with visionary policies, innovative technologies and broad incentives for new and renewable sources of energy.”

He told the Assembly’s thematic dialogue on energy that while technology is constantly being developed, there is a need for incentives to accelerate the process.

“States and the public sector must support the goals of renewable energy, and, by providing appropriate incentives, the private sector can also be mobilized in a concerted fashion,” he added.

Energy is the keystone to all economic development, Mr. D’Escoto said, stressing that “our development and survival as a healthy species depend on the long-term availability of energy from sources that are dependable, safe and environmentally sound.”

In his opening remarks to the gathering, Secretary-General Ban Ki-moon noted that climate change is not only posing serious global threat but is generating a “world of opportunities.”

“The Green Economy is the wave of the future,” said Mr. Ban.

He said that the UN conference in Copenhagen this December aimed at reaching an ambitious new greenhouse gas emission reduction agreement to succeed the Kyoto Protocol can create momentum for the ‘green economy.’

“Copenhagen can give it a massive, even decisive, boost,” he said. “It can support job creation, rural development and environmental protection.

“I believe that more and more people – in government and industry – are seeing the opportunities that are there to be seized,” he said, noting that several economies have earmarked multi-billion-dollar investments in clean energy.

Mr. Ban stressed that the expansion of renewable energy must be made the foundation of development, noting that the transformation of the global energy market is already under way.

Today’s meeting follows the launch of the Secretary-General’s Energy and Climate Change Advisory Group, which consists of business leaders and experts who will advise him on related challenges, particularly in identifying key issues in the run-up to the Copenhagen conference.

The Group held its first meeting at UN Headquarters yesterday under the chairmanship of Kandeh K. Yumkella, Director-General of the UN Industrial Development Organization (UNIDO) and head of the inter-agency mechanism known as UN-Energy. 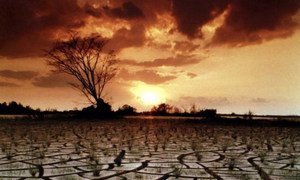 An ambitious and effective global pact to reduce greenhouse gas emissions is in sight, the top United Nations climate change official said today, as the latest round of negotiations wrapped up in Bonn, Germany.