An independent United Nations expert has called on the Government of the Democratic Republic of the Congo (DRC) to protect human rights workers and prosecute those who threaten or attack them.

Human rights defenders, including lawyers and members of non-governmental organizations, “face illegitimate restrictions of their right to core freedoms, i.e. freedoms of opinion and expression, peaceful assembly and association,” said Margaret Sekaggya, the Special Rapporteur on the situation of human rights defenders.

“Defenders, in particular journalists, who report on human rights abuses committed by State and non-State actors are killed, threatened, tortured or arbitrarily arrested, and their offices are raided,” she said in a statement issued following her 21 May to 3 June visit to the country.

Ms. Sekaggya expressed “specific concern at the plight of women human rights defenders whose activities are often hindered by the authorities and who may face discrimination from their male colleagues.”

She issued a list of recommended actions to be taken by the Government, the UN peacekeeping mission in the country, known as MONUC, and the international community to protect the human rights advocates.

The Government should “investigate all human rights abuses against defenders, hold fair trials of alleged perpetrators and sentence them if convicted,” she stated.

Ms. Sekaggya also recommended that MONUC increase the staffing and financial capacity of its human rights offices, and said the international community should help the Congolese Human Rights Ministry’s programmes, and assist it in re-establishing offices in the provinces.

The Special Rapporteur, who carries out her duties in an independent and unpaid capacity, will present her report to the Geneva-based UN Human Rights Council in March 2010. 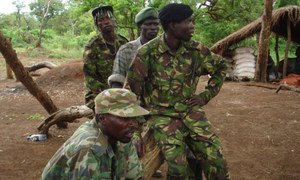 The top United Nations official in the Democratic Republic of the Congo (DRC) has called for swift implementation of “reforms of the state services” to fight poverty and corruption.