The United Nations High Commissioner for Refugees (UNHCR) today voiced concern after Italy sent some 230 people it rescued yesterday off the waters of Malta back to Libya before a proper assessment of their possible protection needs were carried out.

“I appeal to the Italian and Maltese authorities to continue to ensure that people rescued at sea and in need of international protection receive full access to territory and asylum procedures,” High Commissioner for Refugees António Guterres said in a news release.

Noting that the incident marked a significant shift in policies by the Italian Government, the agency stated that it “deeply regrets the lack of transparency which surrounded the event,” and urged the authorities to reconsider their decision and to avoid repeating such measures.

According to UNHCR, the diversion to Libya followed a day of “heated discussions” between Maltese and Italian authorities about who was responsible for the rescue and disembarkation of the people on the three boats, which were in distress.

Although the vessels were closer to the Italian island of Lampedusa, they were in the Maltese search and rescue area of responsibility.

“While no information is available on the nationalities of those aboard the vessels, it is likely that among them are people in need of international protection,” UNHCR stated, noting that in 2008, an estimated 75 per cent of sea arrivals in Italy applied for asylum and 50 per cent of them were granted some form of protection.

Laurens Jolles, UNHCR’s Rome-based representative said the agency has been working closely with the Italian authorities to ensure that people fleeing war and persecution are protected in line with the 1951 UN Refugee Convention.

“It is of fundamental importance that the international principle of non-refoulement continues to be fully respected,” he said, referring to the right of a refugee or asylum-seeker whose case has not yet been fully assessed to not be sent to a country where his or her life or liberty could be at risk.

UNHCR noted that Libya has not signed the Refugee Convention, and does not have a functioning national asylum system.

♦ Receive daily updates directly in your inbox - Subscribe here to a topic.
♦ Download the UN News app for your iOS or Android devices.
UNHCR|boat

UN agency calls for action to save boat people off Malta 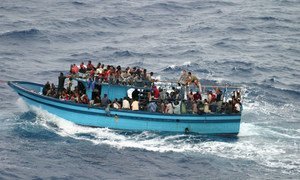 The United Nations refugee agency today expressed its shock at reports that hundreds of people are missing off the Libyan coast as they sought new lives in Europe, as the smuggling season gets under way in the Mediterranean.