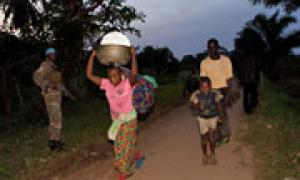 The United Nations High Commissioner for Refugees (UNHCR) said today it continues to be extremely worried about rising violence against civilians in the eastern Congolese province of North Kivu, where attacks by Rwandan Hutu rebels have sparked new displacement.

UNHCR spokesperson Ron Redmond told a news conference in Geneva that thousands have been uprooted since 13 February, when the Democratic Forces for the Liberation of Rwanda (FDLR) began carrying out attacks in Masisi, Lubero and Walikale areas in North Kivu, in the strife-torn eastern region of the Democratic Republic of the Congo (DRC).

“Using firearms and bush knives, the FDLR has attacked Kipopo, Remeka and Kamuobe near Masisi and Kanyatsi and Busigho near Lubero, killing civilians and raping women,” Mr. Redmond reported.

“Local authorities have informed us that some 3,000 people have been internally displaced in Remeka village, some 20 kilometres south of Masisi, following a recent FDLR attack. Some of these internally displaced people are staying in churches and schools and others have taken shelter at several UNHCR-assisted sites around the town of Masisi.”

He added that a joint UN team is heading out today to Kitanga, on the outskirts of Masisi, to monitor and assess the needs of the newly displaced.

In addition, there are also growing fears of reprisal attacks by the FDLR – composed mainly of Rwandan Hutus who arrived in the DRC in the wake of the 1994 genocide in Rwanda – against civilians suspected of collaborating with the joint DRC-Rwanda military operation against the rebel group that began in late January.

The UN peacekeeping mission in DRC (MONUC) last week condemned the “cowardly terror tactics” employed by the FDLR. The mission has boosted its efforts to protect and reassure threatened populations, mostly in North Kivu province where some 250,000 civilians have been uprooted by fighting between Hutu groups, a mainly Tutsi militia known as the CNDP, the Government army and others since August.

♦ Receive daily updates directly in your inbox - Subscribe here to a topic.
♦ Download the UN News app for your iOS or Android devices.
FDLR

The top United Nations official in the Democratic Republic of the Congo (DRC) has again urged combatants fighting with a Rwandan militia group in the volatile North Kivu province of the DRC to put down their arms and return home.