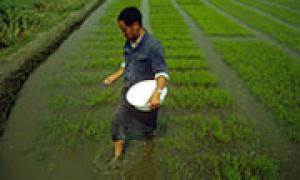 Poor farmers in the uplands of Laos are set to receive a $15 million boost from the United Nations rural development arm to help finance a project aimed at bolstering productivity and improving the sustainable management of natural resources.

Agricultural productivity in Laos is low compared to the standards set by the Association of Southeast Asian Nations (ASEAN), and the country’s self-sufficiency in rice can only be maintained with support from the Government.

The loan from the International Fund for Agricultural Development (IFAD), created to tackle rural poverty, will go towards an initiative aimed at maximising the productivity of the country’s limited arable land and finding solutions to issues such as undeveloped water resources and farmers’ lack of access to markets.

Among the considerable challenges facing the project – costing a total of $36.8 million over six years with financing from IFAD, the Asian Development Bank and the Government of Laos – are a weak institutional and legal framework for the equitable management of agricultural resources, unclear policies and legislation, and land speculation adversely affecting the livelihoods of local people.

In August, the South-East Asian country was also struck by some of the worst floods in a century, damaging farmland, infrastructure and the homes of over 200,000 people, as well as causing disease, malnutrition and the loss of livelihoods.

To date, IFAD has funded 11 rural development projects worth over $90 million in Laos.

The United Nations has appealed for nearly $10 million in urgent humanitarian aid to assist communities hit by recent floods in Laos that have damaged farmland, infrastructure and the homes of over 200,000 people.