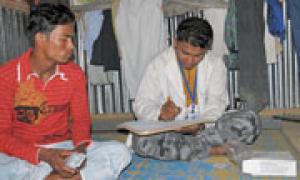 A series of measures taken by the United Nations refugee agency, including using community health workers to distribute condoms out of their homes, has dramatically reduced the incidence of sexually transmitted infections (STIs) among refugees in Bangladesh.

Using community health workers was in fact the “breakthrough” move in the programme, according to Zahid Jamal Khattak, a medical coordinator with the UN High Commissioner for Refugees (UNHCR), which began the initiative three years ago.

Since the end of 2005, the average STI incidence per month has dropped 67 per cent in the Nayapara and Kutupalong camps – which together house about 28,000 Muslim Rohingya refugees from Myanmar’s northern Rakhine state – thanks to the programme.

The initiative started out by training staff in the camps’ out-patient clinics to recognize and properly diagnose infections, and increasing the availability of the correct drugs. However, problems arose in tracing partners to treat all affected patients.

Many male refugees who work outside the camp are having extramarital sex and bringing infections back to their wives, but “culturally, giving condoms to women [in the clinic to prevent future infections] was not very well appreciated,” Dr. Jamal explained.

UNHCR overcame this hurdle with the distribution of condoms through the 39 community health workers (14 of them women) in the two camps out of their own homes, rather than the clinics. Religious leaders were included in the health workers’ training to avoid any problems.

Condom distribution has skyrocketed from 780 in 2005 to 62,580 last year, and Mahamuda Khatun, a 32-year-old community health worker, says she gets requests from women refugees as well as men. “Unmarried male and female refugees visit my house in order to get condoms,” she said. “They say it will help them to prevent disease.”

Condom use was also spurred by training on HIV prevention and education on family planning for a population that traditionally has many children, noted UNHCR.

From bustling streets to lockdown: Bangladesh and the UN mobilize to fight COVID-19: a UN Resident Coordinator blog

Despite a growing need for contraceptives and condoms for HIV prevention, funding has virtually stagnated since 2001 when it peaked at $224 million, according to a new analysis by the United Nations Population Fund (UNFPA).