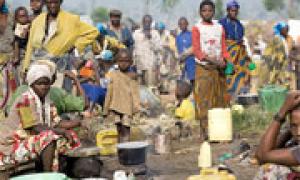 The United Nations refugee agency has called on mainly Tutsi rebels in eastern Democratic Republic of the Congo (DRC) to ensure the rights of 10,000 internally displaced persons (IDPs) amid reports that they are being pressured to go back to their villages.

“IDPs should not be intimidated and we oppose any attempt to coerce them to return against their wish,” Ron Redmond, spokesperson for the UN High Commissioner for Refugees (UNHCR) told reporters in Geneva today.

The IDPs are currently at the makeshift camp that has been growing amid renewed fighting outside a UN peacekeepers’ base in Kiwanja, 90 kilometres north of the North Kivu provincial capital of Goma.

“All returns should be voluntary. We were particularly concerned to learn of recent demands seeking lists of displaced persons at the site and their villages of origin. The IDPs also told us some have been arbitrarily detained or forced to work,” Mr. Redmond added, noting the IDPs are in dire need of assistance – mainly shelter, cooking utensils and food.

The National Congress in Defence of the People (CNDP) of renegade general Laurent Nkunda took control of the Rutshuru area during the upsurge of fighting with Government forces that has seen 250,000 more people driven from their homes since August, on top of the 850,000 uprooted in earlier bouts of the conflict.

The CNDP claims that the rebel-controlled areas, including Jomba, Kisigari, Busanza, and Rugari, are safe for return, but some IDPs have told UNHCR they prefer to remain near the UN base for security reasons, while others would prefer to be relocated to Goma and still others say they would flee to neighbouring Uganda if they could.

UNHCR and its partners are planning a needs assessment followed by distribution of food and other humanitarian assistance. Water supply and latrines remain a major concern.

Meanwhile in Minova, 50 kilometres south-west of Goma, UNHCR is working with other UN agencies and non-governmental organizations (NGOs) to set up a camp for at least 4,000 IDPs living in half a dozen makeshift sites. Another 2,000 IDP families are living with the host community.

Families continue to occupy schools, churches and more recently parts of the local hospital compound. Efforts have been made to identify a new site to be used for their transfer.

There are continued reports of more IDPs arriving in Minova; some say that their farms have been looted and taken over by Mr. Nkunda’s forces while others are coming for assistance.

The UN Mission in DRC, known by its French acronym MONUC, has now deployed more than 90 per cent of its nearly 17,500 peacekeepers to the strife-torn east, where not only the CNDP and the Government army, but also the mainly Hutu Democratic Forces for the Liberation of Rwanda (FDLR), and other rebel groups such as the Mayi Mayi have repeatedly clashed in various permutations and shifting alliances.

♦ Receive daily updates directly in your inbox - Subscribe here to a topic.
♦ Download the UN News app for your iOS or Android devices.
Democratic Republic of the Congo|Internal displacement

The United Nations High Commissioner for Refugees (UNHCR) today said it is very concerned about reports that rebels are putting pressure on those displaced by the deadly fighting in the far east of the Democratic Republic of the Congo (DRC) to return to their villages.